Bank is grappling with low rates and rising household savings 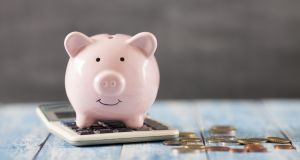 The Central Bank said household deposits increased by €7.3 billion between April and July, the height of the Covid-19 crisis to date.

AIB has raised the prospect of charging wealthy individuals interest for the privilege of minding their money, following the lead of some European banks as they struggle with ultra-low rates and rising household savings.

Banks in the Republic have, for some time, been widening the net of customers being charged what are known as negative rates on deposits. This is because the European Central Bank (ECB) has imposed such charges for the past six years on surplus cash banks deposit with it.

The ECB deposits rate stands at minus 0.5 per cent. The policy has been part of an effort by the ECB to get banks to lend more in order to boost the economy – albeit with limited success.

Over the summer, Ulster Bank began charging negative rates on deposits of more than €1 million held by business customers, credit unions and other institutional clients, while Bank of Ireland moved to impose interest charges on small- to medium-sized businesses with more than €2.5 million in their accounts.

AIB executives told analysts at Davy last week that they would consider introducing negative rates for “high-net-worth accounts” as the ECB’s policy continues to squeeze banks’ incomes, the stockbroking firm said in a report on Tuesday.

While lenders in Europe, led by Germany and the Netherlands, have been moving increasingly to impose negative rates on retail customers, this is the first time an Irish bank has publicly indicated that non-business depositors may face interest charges.

“As with any business in the current environment, we review aspects of how we operate. AIB has successfully insulated 99 per cent of our customers during a sustained period of European negative interest rates. We continue to do so, while keeping our pricing under constant review,” a spokesman for the bank said.

The spokesman declined to comment on what threshold negative rates may kick in for wealthy depositors, or how many could be affected by such a move. Industry observers say it is likely that potentially affected accounts would have to hold at least €1 million – the lowest level at which negative rates kick in for businesses in the Irish market.

The Central Bank said on Monday that household deposits increased by €7.3 billion between April and July, the height of the Covid-19 crisis to date, compared with €2 billion set aside for the same period last year, as individuals became more cautious about spending.