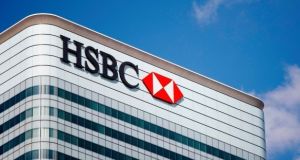 HSBC shares fell as much as 3.6 per cent to their lowest since the Asian currency crisis of 1998.

Shares in HSBC and Standard Chartered fell on Monday to their lowest since 1998 after media reports that they and other banks, including Barclays and Deutsche Bank, moved large sums of allegedly illicit funds over nearly two decades despite red flags about the origins of the money.

The articles, which were carried in BuzzFeed, The Irish Times and other media publications, were based on leaked suspicious activity reports (SARs) filed by banks and other financial firms with the US department of treasury’s Financial Crimes Enforcement Network (FinCen).

HSBC shares in London fell as much as 3.6 per cent to their lowest since the Asian currency crisis of 1998. The stock has now nearly halved since the start of the year. StanChart dropped by up to 3.6 per cent, also to a 22-year low, against the backdrop of a broader sell-off in the market with the STOXX European banks index down 4 per cent.

More than 2,100 SARs, which are in themselves not necessarily proof of wrongdoing, were obtained by BuzzFeed News and shared with the International Consortium of Investigative Journalists (ICIJ) and other media organisations.

In a statement to Reuters on Sunday, HSBC said “all of the information provided by the ICIJ is historical”. The bank said that, as of 2012, it had embarked on a “multiyear journey to overhaul its ability to combat financial crime”.

StanChart said in a statement it took its “responsibility to fight financial crime extremely seriously and has invested substantially in our compliance programmes”.

Barclays said it believes it has complied with “all its legal and regulatory obligations, including in relation to US sanctions”.

The most number of SARs in the cache related to Deutsche Bank, whose shares fell 5.2 per cent on Monday.

In a statement on Sunday, Deutsche Bank said the ICIJ had “reported on a number of historic issues”. “We have devoted significant resources to strengthening our controls and we are very focused on meeting our responsibilities and obligations,” a spokesperson for the bank said.

London-headquartered HSBC and StanChart, among other global banks, have paid billions of dollars in fines in recent years for violating US sanctions on Iran and anti-money-laundering rules.

The media reports come at a tough time for HSBC and StanChart, both of which make the bulk of their profits in Asia, and are reeling from the impact of the Covid-19 pandemic, US-China tensions, and political uncertainty in Hong Kong.

The files contained information about more than $2 trillion worth of transactions between 1999 and 2017, which were flagged by internal compliance departments of financial institutions as suspicious.

The ICIJ reported the leaked documents were a tiny fraction of the reports filed with FinCen. HSBC and StanChart were among the five banks that appeared most often in the documents, the ICIJ reported.

The SARs showed that banks often moved funds for companies registered in offshore havens, such as the British Virgin Islands, and did not know the ultimate owner of the account, the report said.

Staff at major banks often used Google searches to learn who was behind large transactions, it said. In some cases the banks kept moving illicit funds even after US officials warned them they could face criminal prosecutions if they continued to do business with criminals or corrupt regimes, it said.

Global banks in the recent years have boosted investments on technology and staff to deal with tighter anti-money-laundering and sanctions regulatory requirements across the world.

Thousands of clients were booted out of bank accounts in major wealth hubs including Hong Kong and Singapore after a money-laundering scandal in Malaysia, the “Panama Papers” expose and a global push for tax transparency.

FinCen said in a statement on its website on September 1st that it was aware that various media outlets intended to publish a series of articles based on unlawfully disclosed SARs, as well as other documents. – Reuters