Company disclosed capital contribution from shareholders in its 2019 annual report 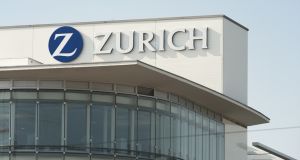 Dublin-based Zurich Insurance plc received a €305 million capital injection from its Swiss parent in March to help cope with the impact of financial market gyrations on its assets.

The company is Zurich-based Zurich Insurance Group’s main unit for writing general insurance business across Europe. It disclosed the capital contribution in its 2019 annual report, filed recently with the Companies Registration Office, under the headline of important events that happened following the end of the last financial year.

“In line with the Zurich Insurance Group’s policy of managing capital in its subsidiaries at a level above minimum requirements, the company received a capital contribution of €305 million from its shareholders on March 23rd, 2020, to offset the impact of the financial market movements.”

Directors signed off on the report on April 8th. Financial markets have rallied strongly since then.

ZIP paid €100 million in dividends to its parent last year, as it swung into a pretax profit of €802 million from a loss of €79 million recorded in 2018. The turnaround was mainly driven by increased investment returns and drop in one-off expenses.

Total assets stood at €24.7 billion at the end of 2019. Gross written premiums rose to €8.16 billion from €7.74 billion for the previous year, according to the report.