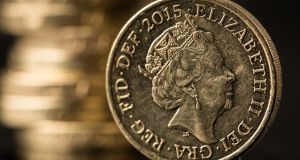 Traders are bracing themselves for more sterling volatility amid fears that Britain is preparing to undercut its Brexit divorce treaty.

The UK will later today set out new details of its blueprint for life outside the European Union, publishing legislation a minister acknowledged would break international law and which could sour trade talks.

Amid the uncertainty, the UK’s currency fell by 0.4 per cent to 90.70 pence against the euro.

And according to Justin Doyle, senior foreign exchange trader at Investec in Dublin, there may be worse to come.

“This recent ramp up in negative Brexit chatter has seen the pound grind lower over the last few trading sessions,” he said, noting the benchmark EUR/GBP rate is now over 2p higher than last Thursday’s lows, currently sitting in/around £0.91.

“We will have to wait and see if Johnson’s new Brexit approach is simply political posturing but whatever it turns out to be, this never ending Brexit uncertainty is concerning to say the least.”

“ Throw this on top of the (probably) imminent cancellation of UK’s uber-supportive pandemic furlough programme and the outlook for the pound in the short/medium term begins to look increasingly negative,” Mr Doyle said.

“With all this in mind, we stand by our mantra of the last few months that for Irish exporters to the UK and sterling sellers in general, anything in the £0.88/£0.90 region has been and will continue to be look like very attractive levels,” he said.

The UK’s new legislation - the Internal Market Bill - will be scrutinised for its treatment of a protocol on Northern Ireland which forms part of the Brexit withdrawal agreement. “The resignation of the government’s head of legal yesterday suggests the changes will be material and that sterling will stay vulnerable,” ING said, adding that $1.2870 looks a possible support level for the sterling/dollar rate on Wednesday.