Has the State missed the boat on cashing in on AIB?

Analysts agree that timing a share sale is far from straightforward 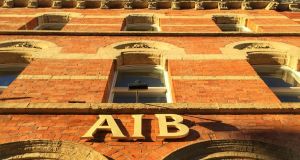 The Government has pledged to hold off selling more than 25 per cent of any bank before the end of this year. Photograph: iStock

Has the State missed the boat on cashing in on AIB ?

Three months ago, the head of the NTMA, Conor O’Kelly, urged the Government to swiftly offload more shares in the bank, after raising €3.4 billion by selling about a quarter of the bank last year.

“It shows that trying to time any sale of shares is very tricky when external risks are so prevalent,” said Owen Callan, an analyst with Investec in Dublin. “It would be quite difficult to run a share sale in the current environment.”

The State remains a key player in the domestic financial sector, holding majority stakes in AIB and Permanent TSB and a minority holding in Bank of Ireland after crisis-era bailouts. Selling AIB, which is due to report on third-quarter progress on Friday, is a key part of the Government’s plan to recover about €30 billion of taxpayer funds injected into the financial system.

No decision has been made on when to sell more shares in the bank, a Department of Finance spokesman said in response to questions. Officials monitor market conditions on an ongoing basis, according to the spokesman.

In theory, the Minister for Finance Paschal Donohoe’s hands are tied to an extent. The Government has pledged to hold off selling more than 25 per cent of any bank before the end of this year.

In reality, the Cabinet could sign off on a quicker sell-off, and it has faced calls to do so. O’Kelly in July pointed to a “material” risk that bank shares could drop given the late stage in the investment cycle.

That has now happened, with the Euro Stoxx Banks Price Index down 25 per cent so far this year.

“AIB and Irish banks generally are caught up in worries about the Italian budget, while closer to home there is some concern about lower house prices and weaker-than-expected mortgage growth and Brexit,” said Diarmaid Sheridan, an analyst at Davy.

The bank argues that government control may be hampering its prospects. Donohoe in April voted against AIB’s plan for the return of top executive bonuses, and months later, chief financial officer Mark Bourke said he was leaving, for Novo Banco, a Portuguese lender majority-owned by Lone Star Funds.

State restrictions, which include caps on pay and an effective bonus ban, make it “very difficult” to operate the bank, chairman Richard Pym said earlier this month.

“Ireland is an open economy, state control of the banking system is normally an indication that the economy is not entirely open,” he said.

Officials insist they don’t have a hard figure in mind before pressing the button on another sale, and either way, the Government faces a dilemma. Sell too low, and it’s a political problem. Selling too high though has a downside as well, according to Sheridan.

“The state has a lot of stock which they’ll likely offload in multiple tranches,” he said. “They need to ensure there is demand for future sales, not just the next one.” – Bloomberg