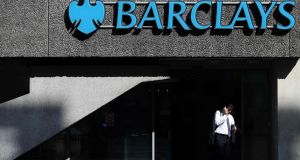 Barclays reported a profit before tax of £1.6 billion (€1.8 billion) for the third quarter. Photograph: Getty

Barclays chief executive Jes Staley said on Wednesday that the British banking giant was “100 per cent” ready for a hard Brexit, as he disclosed that the Central Bank of Ireland has given the green light to its expansion plan in Dublin to maintain access to clients in the European Union.

“I’m pleased to say that the work to effect that plan is well in hand, with the Central Bank having approved the business expansion,” Mr Stanley told analysts on a call after the group reported third-quarter earnings. “We therefore expect Barclays Bank Ireland in its new incarnation to be fully operational before the UK exit in March.”

Barclays Bank Ireland is set to become the largest lender based in the Republic as the unit becomes home to €224 billion of group assets within the next five months. The bank has previously outlined that it will add up to 200 new employees in Dublin. It is due to move into new offices at One Molesworth Street in Dublin city centre in early December.

Barclays reported a profit before tax of £1.6 billion (€1.8 billion) for the third quarter, excluding litigation and conduct costs, above the £1.33 billion pounds expected by analysts polled by the bank.

“In spite of macro-economic uncertainty, and particularly concerns over Brexit which weigh heavily on market sentiment, 2018 is proving to be a year of delivery on our strategy at Barclays,” Mr Staley said.

The profit excluded costs from litigation and fines for misconduct, which have blighted Barclays in recent years as it paid out for misdeeds during and after the financial crisis.

Barclays group profits for the first nine months of 2018 fell in comparison with the same period last year, as it booked a £1.4 billion settlement with the US department of justice over mis-selling mortgage backed securities.

Since taking over as chief executive almost three years ago, Mr Staley has pushed an investment banking-led strategy that has drawn criticism from some shareholders and been the target of a campaign by activist investor Edward Bramson.

While the transatlantic retail and wholesale lender saw income in its market trading business rise by 19 per cent in the third quarter, this came at a cost. The cost-income ratio for Barclays International rose to 69 per cent from 62 per cent in the first quarter. Barclays is targeting a ratio of below 60 per cent at group level over time. – Additional reporting: Reuters

1 Michael Smurfit: ‘I asked Trump to invite me to the White House for my 80th birthday’
2 ‘I’m so lucky to be in the Caribbean – a million miles from Derry Girls’
3 Minister calls on EU to act against tobacco firms ‘undermining’ menthol ban in Ireland
4 ‘The recovery needs to be a full-scale economic renewal’
5 Tobacco makers still trying to make a mint from Irish menthol market
6 Joint accounts: if one of us dies, can the other access the money?
7 Charlie Chawke plans 290 apartments and hotel on Goat pub site
8 Ryanair expects air fares to fall when flights take off again
9 Tax and the Pandemic Unemployment Payment: Your questions answered
10 Ireland stands to benefit in a big way from investing in public transport
Real news has value SUBSCRIBE