Bank is making contingency plans as deadline for exit nears 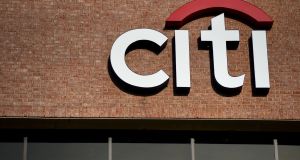 Citigroup plans to reposition some roles at its Southern European private-banking team to Madrid from London as Brexit looms, sources said.

The choice reflects the fact that many of Citi’s senior executives in private banking are Spanish, including regional team leader Fernando Lopez Munoz, the people said, asking not to be identified because the plans are private. Munoz’s team also serves ultra-high net worth clients in Italy, Turkey, Portugal and Greece.

Citigroup is one of many international banks operating in London that are making contingency plans as the March 2019 deadline for the UK’s exit from the European Union gets nearer. The risk that the two sides will fail to reach a deal on future trading arrangements has increased in recent weeks, and EU regulators have warned that it’s up to the banks to make sure they’re still legally set up to do business after that date.

The firm is planning to have its new broker-dealer in Frankfurt up and running by the end of this year in case negotiations break down without a trade deal or transition agreement. The bank plans to relocate around 150 roles to the new hub, many of which will be hired locally, according to a person with knowledge of the plan.

Citigroup is also planning to relocate roles to offices in Milan, Paris, Dublin and Luxembourg, a source told Bloomberg in January. – Bloomberg

1 Lockdown exit: How can Irish economy reopen without big health risks?
2 Bank puts business owner on hold for month on Covid finance
3 Amazon fly dedicated aircraft into Belfast to fill online orders
4 Diageo withdraws full-year forecast in face of global Covid shutdown
5 Why we should be slow to use tracking apps in coronavirus response
6 Government measures will ‘significantly’ support incomes, ESRI says
7 Deliveroo branches into grocery deliveries in Ireland
8 Finance ministers reconvene amid fears for euro zone
9 Hibernia Reit in strong position but coronavirus impact unknown
10 Half of Irish SMEs expect revenue to fall by at least 60% in next three months
Real news has value SUBSCRIBE