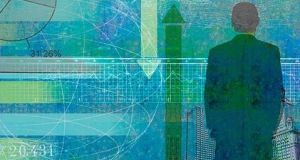 While Hypo Real Estate agreed to sell Depfa as part of a restructuring plan under its own bailout during the financial crisis, the German government scrapped the sale in 2014, and transferred the business to a state-owned bad bank FMS Wertmanagement (FMS-WM). Photograph: Getty Images

German authorities are considering a second attempt at selling Depfa Bank, the Dublin-based lender which nearly collapsed in September 2008, according to sources.

Depfa was bought by Munich-based Hypo Real Estate in 2007, a year before the Irish bank ran into funding problems following the collapse of Lehman Brothers.

While Hypo Real Estate agreed to sell Depfa as part of a restructuring plan under its own bailout during the financial crisis, the German government scrapped the sale in 2014, and transferred the business to a state-owned bad bank FMS Wertmanagement (FMS-WM).

It is understood that Depfa executives and FMS-WM now believe that a sale of the fully-licensed Irish bank could play into the Brexit shakeout as UK-based financial services firms seek to move activities to countries that will remain in the EU. Acquiring a licensed bank may be a quicker way for an overseas financial services firm to set up a subsidiary in Dublin than starting an application process from scratch.

It is likely, however, that FMS-WM would seek to extract some of the bank’s excess capital – possibly through a once-off dividend – before any sale would be pursued, according to sources. Most of the €1.9 billion of capital on Depfa’s balance sheet at the end of June would be considered to be surplus to requirement.

The total assets on Depfa’s balance sheet have fallen by more than half to €23 billion since Depfa was put into wind-down in FMS-WM almost three years ago. Depfa is currently led by chief executive Fiona Flannery.

A spokesman for FMS-WM in Munich declined to comment on the sale consideration.

However, the bad bank’s most recent annual report said that its executive board was “always looking at different ways of speeding up the wind-up” of Depfa. It said options ranged from dissolving the business, reorganising it or selling the rump of a business, which had almost €250 billion of assets at its peak in 2008.

FMS-WM is currently in the middle of a transaction to buy €2 billion of Depfa liabilities, which will accelerate the wind-down of the Dublin-based lender’s assets. It carried out a similar €5.2 billion transaction last year.

Even accounting for the latest move, leading ratings agency Standard & Poor’s estimates that it could still take at least another 10 years to wind-up the business entirely.

The decision by the German government in May 2014 to abandon the sale of Depfa, saying it could secure “a higher value” by running down the business than disposing it, attracted criticism from analysts and bidders alike.

Some financial analysts said the German authorities were loathe to sell the bank to private equity in case they secured a substantial return and lead to negative political headlines.

Leucadia National, an investment firm run by Wall Street banker Richard Handler, and Massachusetts Mutual Life Insurance had been selected as preferred bidders, after offering as much as €350 million, before the deal was scrapped.