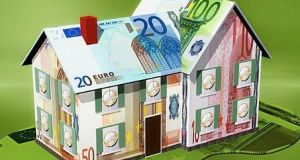 The Central Bank holds originating lenders liable for issues in mortgages that have been sold on. Photograph: Getty Images

Bank of Scotland, which introduced European Central Bank tracker mortgages to the Irish market in 2001, has disclosed that it has identified 184 customers who were impacted by an industry-wide overcharging controversy going back almost a decade.

“We have completed a review of our tracker mortgages as requested by the Central Bank of Ireland, and have identified a small number of accounts with errors relating to tracker interest rates,” a spokesman for the company told The Irish Times, adding that this equates to less than 1 per cent of the total mortgage accounts the company provided before pulling out of the market during the financial crisis.

“We will ensure that impacted customers are returned to the correct position, with appropriate financial redress and compensation.”

Bank of Scotland’s Edinburgh-based parent HBOS was taken over by Lloyds Banking Group in 2008 in a rescue deal. Lloyds subsequently handed back its Irish licence in 2010, and most of its loan book has been sold on to.

The Central Bank, which ordered the country’s 15 current and former lenders to review their tracker loan books almost two years ago, holds originating lenders liable for issues in mortgages that have been sold on.

It is understood that Bank of Scotland’s plans for redressing affected customers is currently with the Central Bank for review, and once regulators approve the bank will send out a letter to customers with their payment.

The disclosure from Bank of Scotland leaves Danish-owned Danske Bank Ireland as the only lender among the 15 where there is no indication yet of how many of its customers may have been impacted. Four of the original 15 companies are no longer part of the examination.

A spokesman for Danske Bank said late last week that its review was ongoing, and the final results have yet to be determined.

Copenhagen-based Danske entered Ireland in 2005 by acquiring National Irish Bank before deciding four years’ ago to exit the retail banking business in the Republic after racking up massive bad loan losses.

Ireland’s main five banks revealed last week, under pressure from the Government, that as many 21,134 of their current and former customers may have been hit by overcharging from either being wrongly denied their right to a tracker mortgage or being put on the wrong rate. That includes 222 cases relating to Permanent TSB’s former subprime unit Springboard.

The number of affected customers among the five other firms that remain subject to the Central Bank-overseen review, excluding Danske Bank, now stands at as high as 315.

The tally comprises figures given to The Irish Times in recent weeks by ACC Loan Management, Irish Bank Resolution Corporation, which took over Irish Nationwide during the financial crisis, Bank of Scotland and guidance from sources on former subprime lender Stepstone Mortgage Funding’s exposure.