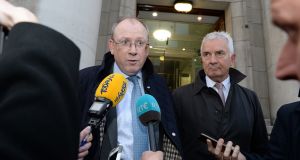 The solicitor behind Thursday’s tracker mortgage settlement is urging every property owner to check the terms of their mortgage – be it a tracker or not – arguing that overcharging is “systemic” in the banking sector.

“What we’re saying is need to get your file, submit your data request, pay €6.35 and get all the paperwork the bank have on you,” said Evan O’Dwyer of Mayo law firm O’Dwyer Solicitors, adding: “This is not just a tracker issue, it’s not just a PTSB issue – it’s a trust issue.”

David Hall, chief executive of the Irish Mortgage Holders Organisation (IMHO), is also of the view that the scope of over-charging could be larger.

“We could have a situation where pre-2010 everyone is reviewing their mortgage,” he said.

On Thursday, a customer of Permanent TSB, Maria Paige, settled a tracker mortgage case with the bank. While the specific terms were not disclosed, it is understood the settlement is for a sum that is a multiple of what was first offered. It’s likely not the first such case to be settled, but we don’t know as of yet just how many have been settled.

“Banks are intent to keep it as private as possible and make it as difficult as possible,” said Mr Hall.

However, it’s now likely to lead to a flood of other cases.

“There will be more cases, but the banks will do everything humanly possible to make them wait and bring them to the steps of the court,” said Mr Hall, adding that he hopes that as many as four in five of tracker mortgage customers of the IMHO go down the legal route, and that some of these will get to court and be made public. It means that the current estimated costs, of about €500-600 million to deal with the scandal, may rise.

“This is going to cost a lot more than people think,” said Mr Hall, adding that variable rate customers may now have something to fear too, as banks may increase their rates “to pay for this long-term cock-up”.

Already, on foot of the settlement, Mr O’Dwyer has heard from a variety of cohorts; some are already in the tracker redress system and are seeking advice as to whether or not they’re tied to it; others are from banks, such as Bank of Ireland, who have yet to commence their redress process; others are from those who have settled and are wondering can they challenge this on the grounds that they didn’t get independent legal advice when making their decision; and others still are wondering if they might have a case.

“There is a lot more mobilisation from customers who want to know if they’re affected or not,” he said, adding that those who have already accepted an offer are wondering “if they’ve been short-changed”, he said.

Customers can typically accept redress and compensation from their lender, and then seek further damages through the courts.

Mr O’Dwyer said the settlement will put the banks “under pressure”, as it will mean that more people will now be prepared to take on cases where they mightn’t have before.

“I have never seen the level of anger that I’ve seen now,” he said.

At present, there is no evidence of collusion among the banks on the tracker issue; however, if this was to change it could pave the way for further settlements.

Fine Gael MEP Brian Hayes has submitted a formal complaint with European Commission competition authorities, asking them to investigate whether banks colluded to intentionally deny customers their correct mortgage rates. If the commission was to investigate, and to find against the banks, it could impose a fine of as much as 10 per cent of turnover

Impacted consumers – even those who have settled but didn’t reach a “final” settlement – could then potentially bring a further case on these grounds.

“If there’s an anti-competitive cartel operating it could create a different level of damages altogether,” Mr O’Dwyer said.

The move also raises the question however of why the complaint has gone to Europe – and why the Competition and Consumer Protection Commission hasn’t launched an investigation.

“Its attitude is pathetic and has raised serious questions about its relevance,” says Hall, arguing: “Of course there’s enough for an investigation. It’s the biggest consumer scam in history of the State.”