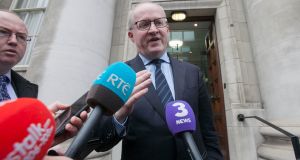 Central Bank of Ireland: its governor, Philip Lane, says banks were interpreting contracts to their own advantage. Photograph: Gareth Chaney/Collins

Anyone who has studied economics will have learnt about the powers of a central bank. One of the traditional ones is moral suasion: a central bank’s ability to persuade financial institutions to fall into line without going the formal route of using rules and regulations.

The governor of the Central Bank of Ireland, Philip Lane, referred to this approach in his evidence last week before the Oireachtas Joint Committee on Finance, Public Expenditure and Reform. It would get things sorted more quickly if the banks agreed voluntarily to fix the tracker-mortgage issues rather than being caught up in a legal procedure, he said.

Yet we already know that at least some of the banks are dragging their heels – and the whole process is already taking too long. Moral suasion is not holding sway, at least in some cases.

Some of the banks are reasonably well advanced, such as Permanent TSB, which took a heavy hit to its reputation as the first to be caught up in controversy but is now well ahead in refunding and providing redress for customers who were wrongly removed from their tracker mortgages.

AIB, after a slow start and a few years of denial, has also dealt with the vast bulk of the customers it has identified as being affected, although there may be more to come.

Ulster Bank has started the process, too – but, amazingly, none of the other banks has yet started to refund its customers. Remember, it is nearly two years after the Central Bank started looking into this, and, worryingly, it is clear that the regulator believes many more cases could still emerge.

We are in the realm of speculation as to what is passing between the banks and the Central Bank. Clearly some have been fighting to minimise the number of cases that should be included, based on the nature of the mortgage contract. The Central Bank’s deputy governor Ed Sibley said in a speech last week that some are taking an overly legalistic approach and not putting customers first.

The banks are now expected to make statements about what they plan to do following pressure from the Central Bank and, crucially, a dressing-down from the Minister for Finance.

We will then be in the Brexit-like territory of judging what will represent “sufficient progress” at the end of the year. The Government is correct to differentiate between the banks here in terms of their response and name names if necessary.

If industry gossip about banks struggling to sort out their initial analysis of the problem is even half right, it is unclear what some lenders can achieve over the next few months

If industry gossip about some banks struggling to even sort out their initial spreadsheet analysis of the problem is even half right, it is unclear what at least some of the lenders can achieve over the next few months. This is complex work, and it is nowhere near as advanced in many cases as it should be.

But the Central Bank has one other obvious option, one that it should arguably have used already and should certainly now consider, particularly if one or two lenders do not immediately fall into line.

It is true, as the Central Bank points out, that its powers to direct payouts for events that took place before 2013 legislation are limited. But it does have powers under fitness-and-probity legislation that came into force in 2010, and it should use them.

Under the Central Bank Reform Act 2010 it can launch an investigation where there is reason to suspect the fitness and probity of senior executives or nonexecutive board members. People in such influential positions are obliged to “act honestly, ethically and with integrity”. Although the banks have no doubt been claiming they must act in the interest of shareholders, there is surely a case to examine the conduct of senior directors and executives who have so far refused to accept the obvious: that customers were wrongly treated and that this needs to be put right.

The Central Bank has the powers to suspend people while investigations are under way and to prohibit them from holding certain jobs following the results of such an investigation. You would think that a summons by the Central Bank governor to a board of directors, putting them on notice that a fitness-and-probity investigation was under way, would put the skids under any bank not co-operating.

This legislation may also provide a route to examine who knew what when the original decisions were made to deprive customers of tracker rates. In some cases the actions of bankers may have been illegal, in which case the Garda needs to be involved. In others the banks were, as Lane put it, interpreting contracts to their own advantage. In these latter cases the action may have been legal but clearly wasn’t ethical. This is surely the kind of thing that the fitness-and-probity rules were designed to tackle.

There are other ways the banks can be hit. Most are likely to face hefty fines following Central Bank investigations, in addition to the cost of refunding customers. There is talk of new taxes and levies.

But the first priority must be to identify the cases and then put people back on the correct interest rates, refund their money and compensate them. If the banks don’t play ball here immediately, a use of the fitness-and-probity regime may well be the quickest way to get them into line.