GE rebounds as Wall Street pushes back against allegations 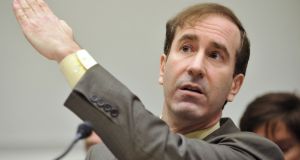 General Electric shares bounced back on Friday after a brutal rout on Thursday as Wall Street analysts defended the industrial conglomerate against allegations from a prominent financial examiner and reiterated their faith in the chief executive.

Shares rose as much as 9.2 per cent, following Thursday’s 11 per cent decline, which marked the steepest drop since 2008. William Blair analyst Nicholas Heymann questioned whether the whistleblower report was “the last Molotov cocktail” and said he did not believe GE’s financial statements purposely misrepresented the company’s financial condition and potential liabilities. The report’s effort to portray GE’s financial condition with an assumption that charges worth about $38 billion (€34 billion) should have been previously recognised was “at best disingenuous and at worst highly inaccurate,” he wrote.

Harry Markopolos, who was involved in exposing the frauds of investment manager Bernie Madoff, said in a report on Thursday that GE would need to raise its insurance reserves immediately by $18.5 billion in cash – plus an additional non-cash charge of $10.5 billion when new accounting rules take effect. He also claimed that GE was hiding a loss of more than $9 billion on its holdings in Baker Hughes.

Mr Markopolos said the company’s cash situation was “far worse than disclosed in their 2018” annual report.

Citi analyst Andrew Kaplowitz said there were “sufficient shortcomings” in the report itself, and that he continued to believe in chief executive Larry Culp’s ability to improve the company. Some of the allegations made in the report were already known and others were “known unknowns,” the analyst said, adding that the Baker Hughes write-off was already expected.

The resurgence in GE shares on Friday will also mean some gains for Mr Culp, who bought $2 million of GE stock on Thursday, a move that reflected “high conviction that the allegations do not represent incremental unknown challenges,” Citi’s Mr Kaplowitz said. – Bloomberg