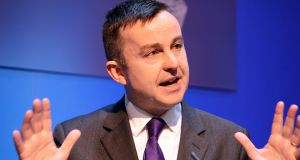 The Banking & Payments Federation Ireland (BPFI) has urged Minister for Finance Paschal Donohoe to retain the help-to-buy scheme for first-time buyers in the next budget.

In a submission to the Department of Finance in advance of Budget 2020, the banking lobby group produced new figures showing that up to 92 per cent of all first-time buyers purchasing a new property with a mortgage used the scheme in the period 2018-2019.

The scheme, which is due to expire at the end of this year, provides a tax rebate of up to €20,000 for first-time buyers purchasing a newly-built home.

It has cost the Government in the region of €200 million since its introduction in 2014.

“At 48 per cent, the first-time buyer (FTB) share of the mortgage market is more than double that during the years 2006-2008 so they are a very significant segment of the market today,” said the BPFI’s newly installed chief executive Brian Hayes, who is a former Fine Gael TD and MEP and was a Minister for State in the Department of Finance from 2011 to 2014.

“The scheme has had a positive effect in supporting demand for FTB houses and in encouraging house builders to build homes to meet this demand,” Mr Hayes said.

“ In addition, purchase of a new home generally creates further expenditure of benefit to the economy across a range of items including furniture and fittings, white goods, insurance and utilities,” he said.

“ For these reasons BPFI believes that the scheme should be extended for a clearly-defined period to provide the certainty that is needed going forward,” he said.