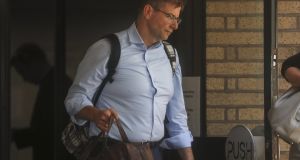 Andreas Hauschild, former executive of Deutsche Bank AG, departs from Southwark Crown Court after being acquitted of helping to manipulate a benchmark interest rate in London, U.K., on Thursday, July 4, 2019. Hauschild was charged with conspiring with fellow Deutsche Bank trader Christian Bittar "the big fish in London," to fix the Euribor rate, which is tied to trillions of dollars worth of loans and derivatives. Photographer: Simon Dawson/Bloomberg

A former Deutsche Bank executive has been cleared by a jury of rigging a key interest rate benchmark, handing another setback to the UK Serious Fraud Office in its attempts to convict bankers for alleged pre-crisis wrongdoing.

Andreas Hauschild, a former managing director at Deutsche and Commerzbank in Frankfurt, was accused of conspiring with four traders who have already been jailed for conspiring to rig Euribor.

The four included Christian Bittar, a former star trader at Deutsche in London. Mr Hauschild had denied wrongdoing in the jury trial at Southwark Crown Court and was found not guilty on Thursday.

The SFO had alleged in its case that Mr Hauschild, “ruled the roost” and led a team of submitters at Deutsche’s headquarters at Frankfurt where he or his team submitted data used to calculate Euribor rates that would be favourable to trading positions held by Bittar or Deutsche during 2005 and 2006.

Euribor is the average interest rate at which European banks are prepared to lend to one another and the rate is set after submissions by 48 “panel banks”.

Bittar, who joined Deutsche in 1999, was one of the most successful interest rate traders in the world at the time and last year he was sentenced to five years and four months at Southwark Crown Court after admitting Euribor manipulation.

Mr Hauschild, 54, who was paid €1.85m in 2005 shortly before he left Deutsche to join Commerzbank, was alleged by the SFO to have “factored in Mr Bittar’s or his own trading profit into the rate setting process”.

However Mr Hauschild testified in his defence that he had done nothing wrong. He said that it was only just before his trial started that he had seen some of the chatroom messages in which traders including Bittar discussed setting Euribor submissions. These messages were relied on by the SFO, but Mr Hauschild said that at the time of one message he had been out of the country on holiday with his family.

Mr Hauschild also told the trial that giving Euribor submitters instructions about what favourable rates to set would “not be proper”.

The outcome of the trial is a blow for the SFO which has previously secured a number of Euribor rigging convictions of high profile bankers including Bittar and Philippe Moryoussef, a French citizen and former Barclays trader who was tried in absentia last year and was sentenced to eight years in jail.

The SFO has come under fire for its recent patchy record after a judge threw out a criminal prosecution against Tesco executives earlier this year and the agency dropped long running probes into Rolls-Royce and GSK because of lack of evidence.

Last month, the Court of Appeal dismissed an SFO appeal against a trial judge’s decision that John Varley, the former chief executive of Barclays, did not have a case to answer because the SFO had failed to provide sufficient evidence against him.

© 2019 The Financial Times Ltd. All rights reserved. Please do not copy and paste FT articles and redistribute by email or post to the web.