Lender suspended repayments on loans given out under Michael Fingleton 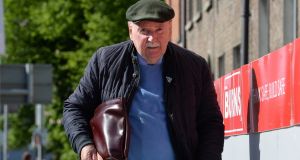 Michael Fingleton, the former Irish Nationwide Building Society (INBS) managing director, approved billions of euro in property loans on which the lender suspended repayments because developers agreed to share profits with it.

A Central Bank inquiry into INBS’s collapse, which cost taxpayers €5 billion, heard on Wednesday that by 2008, €6.025 billion worth of its commercial property loans were given to developers on the basis that they shared profits from the deal involved with the lender.

Brian O’Moore, the inquiry’s senior counsel, said that INBS suspended interest and principal repayments over the lifetimes of most of the profit-share loans.

The lawyer gave details of five such loans as examples to the inquiry. The biggest was £245 million sterling – more than €330 million at the time – given in May 2007 for a property in London where the borrower intended to build 22 luxury apartments and a penthouse.

The loan was for 12 months and the society suspended all capital and interest repayments for that period. The lender was to get a 30 per cent share of profits from the development, which were predicted to be £93 million.

INBS’s credit committee approved the loan on May 2nd, 2007, a day before the borrower formally applied for it.

In another example, the society loaned €10.9 million for 43 acres in the Republic where the borrower hoped to get planning permission to build houses. In that case, the lender suspended interest and capital repayments for three years and sought 40 per cent of any profits.

The other examples included €28 million to build chalets in a French ski resort and €83.5 million to buy and refurbish a London hotel in November 2006.

In all cases, borrowers gave the properties as security and agreed to share profits. The hotel loan’s terms required the borrower to pay just the interest due on the debt. In several cases, INBS gave profit-share loans to businesses controlled by clients who already owed it hundreds of millions of euro.