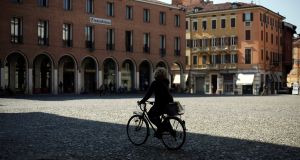 A former Unicredit Bank Ireland executive says he has been unable to find employment since resigning from the lender in 2007 after reporting liquidity breaches at the unit that year.

“I’ve lost everything,” said Jonathan Sugarman, who worked at the Italian banking giant’s Irish unit for a period in 2007, at the launch on Friday of his eBook The Whistleblower.

Mr Sugarman has repeatedly claimed, including most recently before members of European Parliament last month, that his alerts to superiors and the Central Bank about the lender’s repeated breaches of liquidity requirements in 2007 went unheeded. He subsequently resigned in September 2007.

The Central Bank declined to comment specifically on the issue, while spokespeople for Unicredit didn’t respond to a request for comment.

When asked about the matter in the Dáil in November 2010, then Minister for Finance Brian Lenihan said his department had been informed by the Central Bank that after it learned of the liquidity breach, it followed up with the institution, which rectified the matter. While Mr Lenihan did not refer to Unicredit by name, The Irish Times has established that his comments were in relation to Mr Sugarman’s concerns.

“The Central Bank of Ireland has confirmed that this matter has now been fully investigated and the Central Bank is satisfied that all liquidity risk management requirements have been complied with and appropriate steps necessary to prevent any recurrence of this issue have now been taken by the institution concerned,” he said at the time.

However, the Central Bank subsequently fined Unicredit Bank Ireland €315,000 in 2014 for “contraventions” of EU law, including the fact that its holdings of Italian and Spanish government bonds between December 2011 and June 2012 breached permitted limits.

9 Central Bank has sold off 72% of IBRC-linked bonds