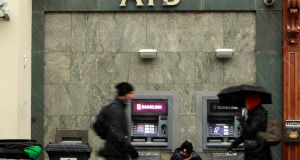 AIB said new lending drawdowns in Ireland increased to € 4.7 billion in the nine months to September 2016, 15 per cent higher than the prior year period. Photograph: Julien Behal/PA Wire

AIB said it produced a “strong performance” in the third quarter with growth in net interest income (NIM) and underlying profitability, the bank said in a trading update.

Its NIM, a key measure of profitability, increased to 2.16 per cent by the end of the quarter from 2.08 per cent at the half year.

This increase was driven by stable asset yields, lower funding costs, lower Nama senior bonds, and the repayment of the Contingent Capital Notes to the State, which owns 99.9 per cent of the lender.

Other income performed in line with expectations to the end of the third quarter driven by stable fees and commissions, profit on AFS disposals and the re-estimation of cash flows of loans previously restructured, the bank said.

However, AIB said regulatory costs and levies which relate to the Banking Recovery and Resolution Directive, the Deposit Guarantee Scheme and the Bank levy have increased with a € 108 million total cost expected for the full year.

It said cost discipline continues across the group while it strategically invest to create a simpler more efficient business model, strengthen resilience and enhance customer experience. Second-half trends were “broadly in line” with the first half performance, the bank added.

Merrion Stockbrokers, in a note on the results, said that the update was positive and that “ the probability that the government will sell down their stake has increased and we would expect it to happen at some stage in 2017”.

AIB said new lending drawdowns in Ireland increased to € 4.7 billion in the nine months to September 2016, 15 per cent higher than the prior year period.

Its market share of new mortgage lending was 35 per cent, 21 per cent of personal lending and 44 per cent of business current accounts.

Commenting on trading, AIB chief executive Bernard Byrne said: “We continue to trade in line with expectations. We have strong underlying profitability, a robust capital base and an improving risk profile. This positions the Group well for future opportunities and challenges in a growing Irish economy.

“We paid a further € 1.8 billion in capital and interest to the State in July on the maturity of the Contingent Capital Notes, making a total of € 6.5 billion of payments to date. We are continuing to invest to support our strategic priority of creating better customer experiences through a simple and efficient operating model.”

In terms of trading in the UK, AIB said new lending trends, which were behind in the run-up to the Brexit referendum, are now in line with expectations for the second half of the year, although overall levels are lower due to volume and foreign exchange translation effects.

As previously signalled, AIB expects a “low level of restructuring-related writebacks” in the second half of the year.

AIB said its fully loaded Core Equity Tier 1 ratio at September was 13.7 per cent and the fully loaded total capital was 16.2 per cent. These are above targets set by its regulators.

Its capital ratios strengthened during the quarter driven by strong profitability and a reduction in risk weighted assets partially offset by an increase in the deficit in the Irish defined benefit pension scheme, mainly due to a lower discount rate.