Banks to Britain: stagger Brexit over years or we could leave 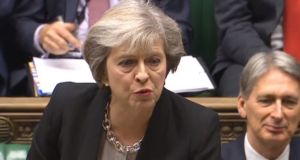 Theresa May: the prime minister has said she will invoke article 50 by the end of March 2017. Photograph: PA Wire

Britain must negotiate a staggered departure from the European Union over several years or risk banks leaving the country, the biggest banking lobby group will warn the government in coming weeks, according to sources familiar with the matter.

The British Bankers’ Association will argue its case in a report to Prime Minister Theresa May’s government, outlining the risks for the country if she does not secure a “transition” phase beyond the two-year withdrawal period that will begin when she invokes article 50 of the EU’s Lisbon Treaty.

The document also calls for a clear message from the government about its vision of Brexit, following perceived mixed messages from ministers about the importance they place on retaining access to the EU single market.

“We’re saying we need an adaptation period ... to stop banks moving en masse,” said one person familiar with the report, speaking on condition of anonymity as the proposals have not been made public.

The BBA’s draft report is the first blueprint about how a transition could work – and spelling out the risks if it is absent.

May has said she will invoke article 50 by the end of March 2017, starting formal withdrawal negotiations with Brussels, meaning Britain would leave in early 2019.

Banks and business have long warned of the need to avoid a “cliff edge” or abrupt British exit from the bloc without advance knowledge about how trading terms might look.

If no deal has been agreed for Britain to retain some access to the single market after the two years of talks, UK-based banks may be forced to withdraw services to EU customers and vice versa unless they relocate to the continent.

Under the currently envisaged timetable, the BBA will warn, banks will not have enough time to prepare themselves for Brexit and their possible departure from London.

It would take banks more than two years to relocate operations. If no transition phase is allowed, they may be forced to leave the country before Brexit.