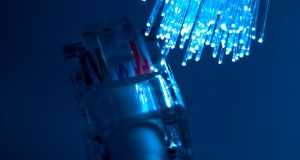 No such thing as free cable: Microwave signals, which carry data from the UK to mainland Europe, are 40% faster than cables. Photograph: iStock

High-speed sub-Atlantic cables may force banks to keep their armoury of currency trading hardware in London for some time, even if the dealers themselves go elsewhere when Britain leaves the European Union.

Many of the world’s major financial firms, most of which have their European headquarters in London, say they are making contingency plans to move traders and investment bankers to mainland Europe if the British government does not negotiate unfettered access to the EU’s single market.

However, moving their trading infrastructure – essentially the computer servers that process millions of international currency deals per second at lightning speed – would be costly, industry consultants and technology firms say.

Banks may be reluctant to transfer the equipment to a continental centre, exposing themselves to tiny but crucial time delays in transactions due to the extra distance data has to travel.

So due to the demands of “low latency” or high-speed computer-driven trading, unless all the major banks move at the same time, none is likely to.

In a market that turns over nearly $2 trillion every day in London alone, every lost nanosecond or sacrificed sliver of daily currency transaction volume is costly.

If Britain loses the ability to sell financial services to any other country within the EU, traders and other frontline staff may move to other financial centres, such as Frankfurt.

But humans mediate a relatively small percentage of overall currency trading these days. Major banks say about 90 per cent is conducted on electronic systems in one way or another, with about a third involving no human intervention at all – including the use of algorithmic computer programmes.

After Brexit, there will be no legal or physical need to shift the computing hubs from the London area; they can continue operating with machine-driven counterparts inside or outside the EU. People monitoring this trading can sit anywhere in the world.

Experts reckon things could eventually change as new technology erodes the advantage of proximity to the fastest data links. But, for now, London has another advantage: a critical mass of trading activity, providing the liquidity that is vital for ensuring participants can get in and out of trades fast.

Banks and other firms have set up their matching engines (computers that process the trades) at data centres in London or just outside, particularly in Slough, a town in Berkshire, about 30km to the west.

“Liquidity is like a good party. You need a lot of people at the party, and you need them there at the same time,” said Brad Bailey, research director for capital markets at consultancy Oliver Wyman. “So you need . . . all that volume in the same spot.”

Because of London’s pre-eminence, Pragma Securities, which provides algorithmic trading technology, is setting up a new group of servers in Slough, unperturbed by Britain’s EU departure.

“We do not see that changing any time soon,” he said. “Everyone wants their trading servers to be where everyone else’s are.”

With automated trading requiring no human input, high speed is of the essence. With humans increasingly out of the picture, their location becomes moot.

“The fastest human can react in about 500 milliseconds; in the FX market you’re dealing in millionths of seconds,” said Bailey. So trading firms and banks “can still have their algos running locally and move their physical and human presence”.

Even before the Brexit vote, there were signs that London’s predominance in the currency market was fading. Its share of global currency trade has fallen to 37 per cent, from 41 percent three years ago, according to a Bank for International Settlements survey.

The race for greater speed may also be fading. Singapore, for instance, has overtaken Tokyo as the leading Asian currency trading hub, even though the cables that link it to both London and New York are longer than those to the Japanese capital.

In the early days of high-speed trading there was a race for every fraction of a second. Now, some experts say, the playing field has levelled out and speed now takes second place to liquidity.

Dan Marcus, chief executive of electronic dealing platform ParFX, said a growing number of trading institutions rely on superior strategies. “For these firms, firmness and depth of liquidity are key, rather than superior speed.”

This means that if enough banks wanted to move all their trading operations out of Britain, the speed edge London has over the rest of Europe because of its proximity to undersea cables would not be enough to stop them.

The idea of building microwave towers across the Atlantic in order to increase the speed of data transmission has even been floated, but this would be hugely costly and difficult.

Microwave technology can also be susceptible to pest problems. A video posted on the internet shows workers emptying huge amounts of acorns that had clogged up a microwave dish. The culprit, it is thought, was either a woodpecker or squirrel.

“Going through the air is much faster,” said Mr Bailey, “but much more complicated and much more sensitive to weather and squirrels.”

Inflation at near five-year low as consumer activity remains muted 11:48
‘Worst is behind us’ but recovery will be slow – Bundesbank economist 11:44
Another Perfect Day for Cork as animal-free dairy goods company raises $160m 11:33
NTMA raises €1.5bn mainly at negative rates 11:06
Jysk Ireland to merge with UK business as it seeks further growth 10:48