Director of collapsed investment firm found to have misappropriated €66.5m in funds 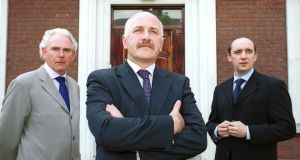 The longest disqualification in the history of company law was handed down today against a director of a collapsed investment firm found to have misappropriated some €66.5 million in client funds.

Two other directors of Custom House Capital (CHC) were also handed lengthy disqualifications by the High Court from acting as directors of firms.

Mr Justice David Keane said former chief executive Harry Cassidy should be disqualified for 14 years, the longest handed down by the High Court.

Mr Justice Keane said the appropriate disqualification period should be 15 years but he reduced that in each case to take account of mitigating factors.

He said the conduct of all three was “deeply dishonest, continued over a protracted period of time until, for a variety of reasons, it could no longer be concealed”.

He said it was “devastating in its impact on those innocent person who had the grave misfortune to entrust the company with their pensions or savings”.

The case comes back in the new year for costs and to allow Mr Mulholland apply to have his disqualification period backdated.

CHC was liquidated in 2011 after a High Court-appointed investigation by two Central Bank inspectors found the “systemic and deliberate misuse” of clients’ money, the majority of which represented transfers to syndicated property investments.

Mr Cassidy was not represented in the case and had written saying he was not contesting the liquidator’s evidence.

Mr Mulholland accepted he had failed in his corporate responsibility but asked for a restriction on involvement in a company rather than a disqualification.

Bernard Dunleavy SC, for the liquidator, said the findings in the Central Bank report had not been challenged by any of the three.

That report found CHC had improperly transferred funds of some €56.1 million. It separately invested about €10.4 million in a fund of its own creation known as the “Mezzanine Bond Fund” without informing clients and while furnishing misleading information to both the clients and to the Central Bank.

CHC committed itself to a number of property projects and placed deposits in advance of securing the required equity from prospective investors, the inspector’s report said.

When the property crisis emerged in 2007, CHC found that expected investment was not forthcoming. In fear of loss of the initial deposits, and damage to reputation, CHC sought to cover investment shortfalls through the creation of products such as the Mezzanine Bond and eventually through misuse of client holdings.

The inspectors found “systematic and deliberate misuse of assets and cash belonging directly or indirectly to clients”. The misuse was deliberately disguised through the use of false accounting entries and misleading statements to clients.

Among the report’s findings against the directors was that they gave inadequate attention and resources to compliance matters and facilitated a culture of evasion of internal controls and the overriding of such controls.

In his disqualification application to the court, the liquidator also presented evidence of wrongful payments of “commission”, failure to keep books of account and undisclosed profits earned through directors’ roles.

Mr Justice Keane, in his judgment, said an example of the misapplication of funds was the withdrawal of €3 million from a pooled equity account held with a Dublin stockbrokers. This was only to be for investment in equities but was instead used to make payments on behalf of two of CHC’s property holdings special purpose vehicle companies (Holstein Retail SA and Schwelsig Retail).

In another example, the judge said, 51 CHC clients who invested about €5.9 million in commodity bonds were not told they had been redeemed in November 2009 for €7.3 million. CHC used more than €1.1 million of that to repay monies due to other clients who had not invested in those bonds.

In December 2009, CHC loaned €2.5 million of those same bond monies on a six-day basis to a Dubai property development company which needed to show evidence of an ability to access substantial funds to secure a contract.

The judge also said Mr Cassidy and Mr Mulholland made undisclosed profits in the form of authorised “commission” payments from client funds totalling €2.3 million. The court heard this was without the knowledge of Mr Whyte.

The judge was satisfied all three directors had been guilty of a fraud on the company, or on its creditors, or both.

Mr Whyte had, in his defence, asserted that Mr Cassidy had a “domineering personality”, the judge said.

While this might, if established, provide some mitigation for Mr Whyte, it could not exculpate him.

Mr Whyte had also said if he had exposed Mr Cassidy, a panic might ensue leading to a run on the company and greater loss to clients.

While that might, if accepted, provide some mitigation for Mr Whyte, it “cannot excuse his failure to halt, much less his active complicity in, Mr Cassidy’s fraudulent conduct”, he said.