Ronan remains as country officer for Citi’s business in Ireland 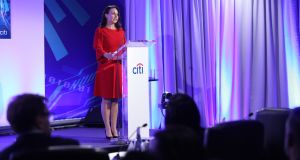 Cecilia Ronan joined Citi in a HR capacity in 2000.

Citigroup has picked Cecilia Ronan to head up its pan-European banking unit that employs more than 9,000 people, two decades after the Limerick native began her career with the group in its Dublin human resources department.

Ms Ronan succeeds Czech-born Zdenek Turek as chief executive of Dublin-based Citibank Europe, according to an internal email announcement at the group issues on Thursday afternoon, seen by The Irish Times.

Mr Turek has been appointed as chief risk officer for Citi’s Europe, Middle East and Africa (Emea) operation as part of a wider reshuffle of roles within the business.

Part of Mr Turek’s role as “head of the Europe cluster”, into which chief country officers report, has moved to Frankfurt to Kristine Braden, who has been chief of staff to group chief executive Mike Corbat since 2018.

Citibank Europe effectively doubled in size to about $50 billion (€45.5 billion) in assets four years ago when the group’s UK-based Citibank International unit was folded into the operation.

The balance sheet had expanded to $60 billion (€54.6 billion) at the end of 2018, mainly as a result of the establishment of a German branch that took over existing Citigroup assets that were based in that country, according to the bank’s most recent set of accounts.

“It is a critical priority to ensure that we have the right leadership and organisational structure in place to take advantage of the distinct opportunities that exist for Citi globally, and within Emea, ” said David Livingstone, chief executive of the banking giant’s Emea operations.

Ms Ronan (46) had been Mr Turek’s deputy and has served as country officer for Citi’s business in Ireland, where about 2,500 people are employed, for the past two years.

Having spent much of her school years in Africa, where her father worked for the United Nations developing accountancy qualifications in countries such as Malawi, Botswana and Zambia, Ms Ronan went on to study law in University College Dublin.

Ms Ronan joined Citi’s HR department in Dublin in 2000 from Microsoft Ireland. In 2012, she was appointed head of the Citi Service Centre where she led a team of 1,900 operations and technology professionals.