The bank reported a pretax loss of £130.8m as it wrote off technology projects 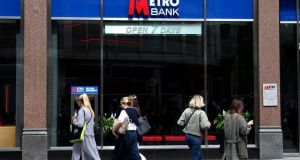 Metro Bank shares lost nearly a fifth of their value after the struggling British lender unveiled plans to cut costs and sell assets in the wake of an accounting scandal.

The bank reported a pretax loss of £130.8 million (€156 million) for the year as it wrote off technology projects, vowed to move back-office jobs to cheaper locations and open fewer branches. Metro said it would focus more on speciality mortgages, small- and medium-sized business and unsecured loans.

The losses included £27 million in remediation after Metro Bank revealed errors last year in how it accounted for risk in some of its mortgages -- a misstep that UK regulators are investigating. Metro Bank will also return £50 million of the £120 million it was awarded last year to boost competition in British retail banking.

“An enhanced focus on costs, improved productivity, and investment in our infrastructure will enable our deposit-led franchise to deliver profitable growth over the medium term,” Dan Frumkin, who became the bank’s permanent chief executive this month, said in a statement.

Mr Frumkin told analysts there were “no sacred cows” in the revamp, saying Metro Bank could close branches if they fail to make money, in a departure from founder Vernon Hill’s bricks-and-mortar strategy.

The lender’s shares fell as much as 19.3 per cent in morning trading in London. The stock has fallen almost 90 per cent in the past 12 months.

“There is nothing concrete in any of this to support the revised 2024 targets,” John Cronin, an analyst at Goodbody, wrote in a note. “Radical action with the help of third party loan assets (or potentially a fast injection of much lower cost deposits, which feels unlikely) is needed.” – Bloomberg