Mastercard to create 1,500 Irish jobs over next five years 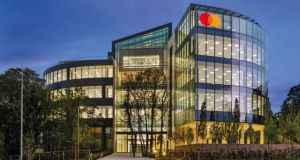 Mastercard will take on more office space at One and Two South County, a newly built campus in Leopardstown.

Mastercard is to create 1,500 jobs in the next three to five years as it significantly grows its new European technology hub in Dublin.

The company is to grow its workforce with investments in its artificial intelligence, cyber security, blockchain, and user experience teams.

As such, it will be recruiting for technologists with strong development and software skills looking to work on “impactful, cutting edge technology projects”.

Mastercard Ireland opened its operations in 2008 with 36 staff and since then has grown to over 650 people.

In line with its expansion plans, it will be taking on additional office space at One and Two South County, a newly built campus site in Leopardstown, South Dublin, not far from its current home.

Ed McLaughlin, president of Mastercard operations and technology, said the new campus would help the company “stay on the forefront of emerging tech trends” and ensure it is “well positioned to forge the future of digital commerce across the globe”.

“This expansion of Mastercard’s new European technology hub, creating 1500 jobs, is excellent news and demonstrates a substantial commitment to Ireland, making it a key location in the company’s global operations,” he said.

“Ireland’s position as a leading global financial centre includes a strong record of success in the payments sector. Ireland is home to some of the world’s largest payment businesses, including Mastercard.

“This substantial investment and build out of Mastercard’s operations in Dublin is a further strong endorsement of Ireland’s standing in international technology services and its offering to companies considering locating here.”

Mastercard expects to begin take up occupancy One South County by the end of the year, with further plans for Two South County when it is ready.