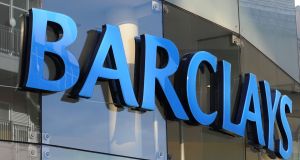 An end to the SFO’s case against Barclays would remove the biggest remaining legal headache facing the bank over its conduct during the financial crisis. Photograph: Joe Giddens/PA Wire

A British court has dismissed charges brought by the Serious Fraud Office (SFO) against Barclays over its 2008 capital raising, the bank said on Monday, suspending for now the threat of regulatory sanctions on its business operations.

The SFO was, however, not prepared to let the case drop.

“We are likely to seek to reinstate the charges by applying to the High Court,” an SFO spokesman said. It was not clear when that application would be heard.

Barclays denied the SFO’s allegation that a $3 billion loan it made to Qatar in November 2008 was connected with a Qatari investment in the British bank, which ultimately helped it avoid a British government rescue during the financial crisis, unlike its rivals Lloyds and Royal Bank of Scotland.

An end to the SFO’s case against Barclays and its operating subsidiary would remove the biggest remaining legal headache facing Barclays over its conduct during the financial crisis.

The collapse of one of its most high-profile corporate prosecutions would also represent a major setback for the SFO, with the prosecutor’s office under fire from politicians in recent years.

Qatar, which is a major investor in Britain, has not been accused of wrongdoing itself, but public companies in Britain are normally prohibited from lending money for the purchase of their own shares, known as “financial assistance”.

The SFO had been pursuing charges that Barclays unlawfully received such financial assistance, and that it had conspired with former senior executives to commit fraud over two so-called “advisory services agreements” between Qatar and the bank which facilitated the fundraising.

Even if the SFO were to fail in its efforts to reinstate the charges, Barclays still faces other legal and regulatory problems related to the 2008 fundraising.

The US department of justice and the Securities and Exchange Commission are investigating the advisory services agreements.

Separately four former Barclays bankers face a charge of conspiracy to commit fraud by false representation when they negotiated a capital injection for the bank from Qatar, in a trial due to start next January.

Barclays said the dismissal of the charges against itself should not be taken to have any bearing on whether other people may have committed a criminal offence. – Reuters