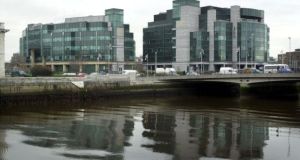 Sales of Irish-domiciled funds hit a record level of nearly €300 billion in 2017, according to Irish Funds, the industry’s representative body.

This was more than twice the amount seen in 2016 and represents over 30 per cent of net sales of all European funds, reflecting the size of the funds industry here.

The figures, released to coincide with the group’s annual conference, contributed to an increase in assets in Irish-domiciled funds to a new high of €2.4 trillion, representing year on year growth of 16 per cent.

The figures reflect the underlying growth in assets-under-management for managers who have established funds in Ireland, Irish Funds said.

Almost 5 per cent of funds of worldwide investment fund assets are now domiciled in the State, making the Republic the second largest centre in Europe, behind the UK.

As Brexit negotiations continue, Irish Funds said it was continuing to see managers from around the globe looking at domiciling their funds in the Republic.

It noted that over 900 fund promoters from more than 50 countries have funds domiciled in Ireland, while there were 38,000 people employed in the financial services industry and in excess of 16,000 directly in investment funds industry.

Addressing the conference in Dublin on Thursday, Minister for Finance Paschal Donohoe said: “The funds industry has been a successful and significant element of the Irish financial services landscape for many years.”

“This success has been underpinned by changes in the legislative landscape that have made Ireland an attractive domicile for promoters in Hong Kong and Asia, across Europe, the US and beyond.”

“Alongside a regulatory regime providing a robust and consistent approach to the supervision that promotes confidence in Ireland as a location for investment funds.”

“This reflects the success of the funds industry in Ireland over the years and its significant contribution as a source of highly skilled employment right across the country,” he said.