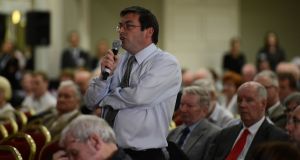 Some 10,000 borrowers in long-term mortgage arrears should have their homes repossessed, consumer advocate Brendan Burgess has claimed.

He told the Oireachtas Finance Committee that the customers in question had not paid their mortgages for five years or more and, in many cases, had not engaged with their lenders in any meaningful way.

Mr Burgess, who founded the popular consumer website askaboutmoney.com, said these borrowers were partly responsible for the higher interest rates being charged by banks here and were therefore being subsidised to stay in their homes by responsible borrowers.

“It is absolutely essential that if you want to protect the vast majority of responsible borrowers you’ve got to allow the banks deal with the very small percentage – about 2 per cent, 10,000 or so – of borrowers, who are not prepared to pay their mortgage,” he said.

Recent Central Bank figures show that there are currently 24,000 borrowers in mortgage arrears of more than two years, and 10,000 in arrears of over five years.

“This would not be tolerated anywhere else. It’s an extraordinary high level of arrears,” Mr Burgess said.

Several Irish banks, including AIB, Permanent TSB and Ulster Bank, are in the process of selling off billions of euro of non-performing loans to so-called vulture funds, a process that has been linked to the legal difficulties faced by banks trying repossess properties.

“I would like to see vulture funds redundant . . . but if you’re not going to allow the banks to repossess houses then vulture funds are necessary,” he told the committee.

Mr Burgess said banks typically lost about 20 per cent of the value of a loan by repossessing the underlying property, but when selling to vulture funds the write-off could be as much as 60 per cent.

“So the bank is losing money by selling it to a vulture fund – it would be much better to allow them repossess the house,” he said.

Mr Burgess said he wanted to see responsible borrowers protected, noting that some vulture funds had been aggressive in their dealings with customers.

Many borrowers, who got in trouble some years ago but have since recovered, were now paying the interest on their loans and some capital but were still being “harried” by vulture funds.

In other jurisdictions, he said, these borrowers would have their arrears capitalised and their mortgages rescheduled.

Martha O’Hagan Luff of the Trinity Business School suggested the sale of distressed loan portfolios to private investment funds may facilitate debt restructuring. “Private funds will have greater flexibility in the resolution of non-performing loans (NPLs),” she said.

“In the case of a renegotiated loan involving the voluntary surrender of a property, funds will have greater flexibility to allow debt forgiveness on the outstanding loan which is very difficult for banks to do given the moral hazard issues which would arise with other customers,” she said.

“In this scenario customers may be able to negotiate a better deal with a fund than they would be able to with a bank,” she said, while noting the sell-off of NPLs would deliver badly needed liquidity to banks .

Debt campaigner David Hall, however, said vulture funds were a “cancer” in Irish society that would trigger thousands of home repossessions.

“They have one thing on their agenda and that is feasting on the carcasses of those who suffered because of the gambling by banks,” he said.

Mr Hall said that vulture funds had no interest in restructuring loans or working with those in arrears.