Vulture funds are a ‘cancer’ that will trigger thousands of repossessions 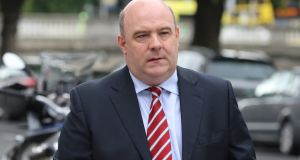 David Hall: predicts that up to 17,000 mortgage holders in long-term arrears could see their homes repossessed.

Vulture funds are a “cancer” in Irish society that will trigger thousands of home repossessions, debt campaigner David Hall has warned.

“They have one thing on their agenda and that is feasting on the carcasses of those who suffered because of the gambling by banks,” he told the Oireachtas Finance Committee.

Mr Hall said that vulture funds had no interest in restructuring loans or working with those in arrears.

“ They buy to obtain the asset and sell it and profit. If you want to lose your home and possibly have a debt written off then vultures are for you. If you want somewhere to live , well that’s an issue,” he said.

Ulster Bank, Permanent TSB and AIB are planning to sell-off billions of euros of non-performing loans to third-party funds in the coming months.

AIB said on Thursday it had agreed to sell €1.1 billion of bad loans to US debt firm Cerberus at a discounted rate.

“We have entered a dangerous stage in the mortgage arrears story,” Mr Hall told the committee.

He predicted that up to 17,000 mortgage holders in long-term arrears could see their homes repossessed on foot of these sales.

“Those gurus who claim vultures adhere to contractual terms need to understand nowhere in any contract does it require the loan owner to offer any restructuring,” he said.

“Also, when in arrears those with the mortgage have broken the contract by going into arrears leaving them exposed,” Mr Hall said.

“While banks are horrible, they must out of a mix of legal, fiscal and social necessity – and for reasons of PR, provide some solutions. Vultures are by contrast a social evil,” he said.

“ Private funds will have greater flexibility in the resolution of non-performing loans (NPLs),” she said.

“In the case of a renegotiated loan involving the voluntary surrender of a property, funds will have greater flexibility to allow debt forgiveness on the outstanding loan which is very difficult for banks to do given the moral hazard issues which would arise with other customers,” Ms O’Hagan Luff said.

“ In this scenario customers may be able to negotiate a better deal with a fund than they would be able to with a bank,” she added.

She also said the sale of these loans will deliver badly needed liquidity to banks .

Financial commentator Brendan Burgess said up to 10,000 homeowners in long-term arrears should have their homes repossessed as they had not paid their mortgages, in many cases, for five to seven years.

He said the variable rate mortgage holders, who pay a premium here, were effectively paying for these people, many of whom had not engaged with banks and were unwilling to engage.