Fexco profit rises 80% in 2017 as acquisitions pay off 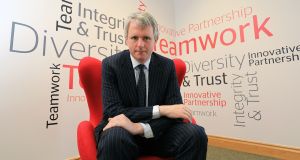 The Kerry-headquartered firm said its income rose 8 per cent to €211.8 million for the year, with operating profit up 139 per cent to €13.7 million.

The company said it had a strong year in its foreign exchange and payments operations, contributing to the increase. The 2017 figures also include contributions from the company’s recent acquisitions and investments.

At the end of the year, net assets were €349 million, and the company had cash balances of €182 million.

Fexco, which processes 100 million transactions on its systems each year, employs more than 2,300 people in 29 countries. Around 30 per cent of revenue is generated from customers outside Europe. The company is set to create 175 jobs in Killorglin within three years.

“We have improved the group’s performance through both organic growth and targeted acquisitions. In 2017 we continued to diversify into new product areas and to invest in the innovation that has proven key to our evolution into a global fintech business,” said Denis McCarthy, chief executive of Fexco Group. “Our broad portfolio of businesses is underpinned by a strong and conservatively managed balance sheet, which leaves us well placed to pursue further growth opportunities”

Fexco has continued its acquisition spree in 2018, buying Change-Link in February and the Thomas Exchange Group in August. It has also taken a minority stake in specialist aircraft lease and asset manager Airborne Capital.

It also expanded its property management operations and its asset finance business, and is building a new research, development and innovation centre near its Killorglin base.

The company sold Goodbody’s stake in the Irish Stock Exchange in March, a deal that yielded a €23.5 million profit. The sale of Goodbody has yet to be approved by regulators.