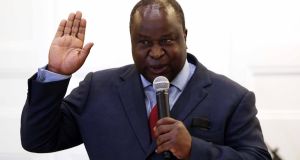 An official probe into the failure of South Africa’s VBS Mutual Bank has alleged that €115 million (1.9 billion rand) was looted by 53 beneficiaries, including senior management at the institution, politicians and tribal royalty.

The forensic report containing the explosive allegations was commissioned by the South African Reserve Bank (SARB) to investigate what led to a liquidity crisis at VBS that forced SARB to place it under curatorship last March.

VBS, which opened for business in 1982, refers to itself as a “wholly black-owned specialist corporate finance and retail bank” on its website.

Initially it served individuals, group-savings clubs and burial societies from poor communities in Limpopo province. Unlike commercial banks, mutual banks are much smaller and aim to encourage a culture of saving.

However, the bank grew rapidly between 2015 and 2018 when it started taking deposits from municipalities, which is illegal under South Africa’s Banks Act. It also targeted state-run enterprises and other public sector entities for deposits.

In total, 15 municipalities pumped millions of euro into VBS that was meant for service delivery projects in rural communities.

When these municipalities and other customers started to withdraw their money, VBS ran into the liquidity crisis that prompted SARB to investigate its internal practices.

Titled The Great Bank Heist, the ensuing report produced by advocate Terry Motau and Werksmans Attorneys outlines how an initial €57 million (R936 million) was siphoned off from the bank by its executives and the largest shareholder‚ Vele Investments.

“The investigation has revealed a wide range of criminality in the conduct of the affairs of VBS. That is also in regard to Vele,” stated the report made public on October 9th.

It goes on to say that “it emerges very clearly that VBS and Vele have been operated as a single criminal enterprise, with [chairman Tshifhiwa] Matodzi firmly at the helm. It is imperative that those who have been identified as participating and benefiting from this criminal enterprise be charged and prosecuted.”

To conceal the initial embezzlement, millions of euro more in “commissions” that served as kickbacks were handed out by the bank to senior municipality officials. In turn, they deposited funds meant to pay for service delivery into VBS to cover for the stolen money.

Furthermore, the report says that internal and external auditors were also brought on board to manipulate the bank’s systems to hide the various fraudulent payments made.

“Payments of very large sums of money were made to the various perpetrators of the looting as a reward for their participation,” the report claimed, before adding “and substantial bribes were paid to certain VBS directors and other related parties to buy their silence”.

In addition to criminal prosecution, the report recommends that those found guilty of the fraud should be held liable in civil proceedings for the roles they played.

Brian Shivambu is accused of channelling over €600,000 of this money to his older brother Floyd, and a further €79,000 was said to have found its way into the opposition party’s coffers.

Despite the size of the amount stolen, Mr Motau said in his report that the manner in which the theft was conducted was simple in many instances. In some cases, VBS gave out car or home loans to individuals, and turned a blind eye when no repayments were made.

“There are also very large overdraft facilities where no amounts were ever paid into the accounts and the facility limits were simply increased to permit the escalating outflows,” he said.

In one instance that Mr Motau highlights, Mr Matodzi supplied instructions to VBS colleagues that effectively wiped out the overdrawn balances on some 34 accounts at the bank that he owned or had an interest in, by crediting them with fictitious amounts totalling €19.8 million.

At least four individuals named in the report as receiving illegal payments have admitted to taking bribes or committing fraud in the VBS scandal, according to Mr Matodzi.

However, most of the other accused have either pleaded ignorance of the alleged fraud, stayed silent in the face of the allegations, or protested their innocence.

Venda King Toni Mphephu Ramabulana has said he will co-operate with the authorities and repay the funds he received if they are “shown to be the proceeds of illegalities”. Brian Shivambu has said the same.

The EFF has backed its deputy president who maintains he has never received money from his brother that was linked to VBS.

The party says it has gone through Floyd Shivambu’s account statements from 2014 onwards and found nothing to link them to the VBS scandal. The EFF also denies receiving any of the tarnished money.

New finance minister Tito Mboweni told parliament he will reveal this week how the government intends dealing with the scandal’s fallout.