Bank is ranked 496th, having received no marks for culture, customer focus and investment in staff 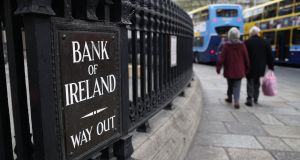 Bank of Ireland has been rated among the worst performers on a global list of 500 publicly-quoted lenders compiled by banking research firm Lafferty Group that assesses firms across a number of “quality and sustainability” measures.

The country’s largest bank by assets is ranked 496 in the 2018 Lafferty Banking 500 Index, having received zero marks for culture, customer focus and investment in staff, while securing favourable grades for the quality of its equity capital buffers, return on assets, and information technology (IT) overhaul programme.

AIB has been ranked within the weakest 30 per cent of banks, at 353, with positive scores for return on assets, equity capital and liquidity dragged down by zero scores for culture, strategy and customer focus.

The index, which started in 2016 and initially looked at the 100 largest banks across 28 countries, assesses firms across 19 metrics, almost entirely drawn from their annual reports.

“You can see the culture of a bank from its annual report, where there are so many signals staring you in the face,” said Michael Lafferty, the Irish founder and chairman of the London-based research and publishing group. “These include the bank’s strategy, or lack of strategy, or whether it’s a retail bank that prefers to talk about big deals, or one that doesn’t highlight how it invests in staff.”

Bank of Ireland’s low ranking is drawn from a report completed just months after Francesca McDonagh became chief executive. The British banker has stated that establishing a “customer-focused culture” is a top priority as she spends €1.4 billion over four years to the end of 2021 transforming the group’s IT systems and business model.

In July, the Central Bank published a report into the culture of Irish banks in the wake of the tracker-mortgage scandal, concluding that top executives retain too much of a crisis-era “firefighting” mindset to place customers at the heart of all decisions.

The sector is setting up an Irish Banking Culture Board, to be headed up by an independent chairperson, to foster a “customer-focused culture within the sector in order to rebuild trust and confidence”.

“Trust has been badly damaged in the banking sector. We can’t let that fester. It needs to be resolved,” Maurice Crowley, acting chief executive of the Banking & Payments Federation Ireland, said in an interview with The Irish Times last week.

AIB and Bank of Ireland declined to comment on their ratings.