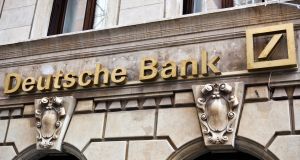 Deutsche Bank conceded revenue will take a bigger hit than it previously expected as cost cuts and a scaling back of the business keep eating into Europe’s largest investment bank.

The German lender reported its lowest third-quarter revenue since 2010 and now predicts a slight decline for the full year, after earlier guiding for a flat result. A sharp decline in trading led a 9 per cent contraction in the firm’s top line last quarter, more than analysts had predicted, reinforcing a downward spiral that has raised questions about the future of Europe’s largest investment bank.

Chief executive Christian Sewing has staked the company’s latest turnaround effort - the fourth in three years - on improving profitability by trimming costs and refocusing on fewer, core activities. The CEO on Wednesday said the bank is on track to post its first annual profit in four years. Yet the continued contraction in the top line risks undermining investor confidence in the strategy and fuel speculation that the lender may need to combine with a rival in the long run.

“We made headway on our cost reductions,” Mr Sewing wrote in a memo to employees. “On the other hand we have not yet achieved a turnaround in terms of revenues.”

In the third quarter, trading income in the key fixed-income and currency division slumped 15 per cent from a year earlier. Equities trading, where Wall Street banks on average posted gains, declined at the same pace. The business has been among the hardest-hit by executives departures recently.

“Costs are in line with targets,” said Daniel Regli, an analyst with MainFirst who has a hold recommendation on the stock. “But there is continued weakness in investment bank revenue. That needs to be fixed.”

The cost reductions have left the bank stuck in what chief financial officer James von Moltke has called a “vicious circle” of declining revenue, “sticky” expenses, a lowered credit rating and rising funding costs. The bank on Wednesday highlighted higher funding costs and geopolitical events among the headwinds for the securities unit.

The investment bank’s origination and advisory business fared a little better, with a decline of 1 percent. Sewing said the bank won leading roles in six of the 10 biggest transactions by fee volume during the third quarter.

While the chief executive has acknowledged that his focus on expenses will also hit revenue, he argues costs are the item over which the bank has the most control. His ultimate goal is to restore profitability to a bank that has lost money for the last three years, and lift a share price that’s still near to its historic low.

“We need to end the year on a strong note,” he wrote in the memo. “We’ll stay disciplined on costs, and we’ll turn around revenues.” - Bloomberg