Magdalene and Hep C compensation to be exempt from income tax 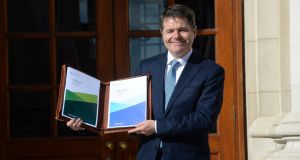 Victims of the hepatitis C blood contamination scandal and Magdalene Laundry survivors will not pay tax on their compensation payments under previously unannounced measures in the Finance Bill. Photograph: Dara Mac Dónaill

Victims of the hepatitis C blood contamination scandal and Magdalene Laundry survivors will not pay tax on their compensation payments under previously unannounced measures in the Finance Bill.

But the Bill confirms there will be no respite for hotels and restaurants – and hairdressers – from the budget day announcement that the reduced rate rate of VAT they had enjoyed for a number of years will be revoked. Industry groups had lobbied Ministers for a one-year breathing space but the Finance Bill says the rate will rise form 9 to 13.5 per cent from January 1st next.

While providing for the various tax changes announced in the budget, the Bill included a number of measures not announced by Minister for Finance Pascal Donohoe last week.

It specified that lump-sum payments, recurring payments and any income generated from the investment of lump sums accruing to Magdalene Laundry or hepatitis C victims would not be liable to income tax.

Since it was set up in the wake of the McAleese report in 2013, the Magdalene Laundry redress scheme has paid out just over €26 million in lump sum payments to about 700 survivors.

In the case of the hepatitis C scandal, the State has paid out more than €1.5 billion in compensation to people, who contracted the virus as a result of contaminated blood and blood products, mostly between the 1970s and 1990s.

The Finance Bill also closed a loophole in the State’s tax law that was exposed through the Panama Papers controversy, allowing individuals to avoid tax by disguising a company’s profits as loans to non-resident firms.

The Bill also introduces a technical change to the rent-a-room tax relief scheme, which allows homeowners to earn up to €14,000 tax free when they rent out part of their property.

The scheme was intended to boost the amount of student accommodation in the State but was latterly exploited by Airbnb-type landlords. The new measure introduces a minimum continuous rental period of 29 days to exclude short-term tourist lettings. There are exemptions for short-term lets to language students, for respite care under recognised programmes and for digs that are generally not used over weekends.

“This does not reflect a change in policy but is an anti-avoidance measure which puts beyond doubt that the relief does not apply to short-term tourist accommodation, including that provided via internet booking sites,” a spokesman said.

Other measures include the extension of the tax on sugar-sweetened drinks to milk substitute or milk fat-based drinks that contain less than 119mg of calcium per 100ml. It is understood that, in practical terms, this will not see any more drinks currently available on the Irish market come under the auspices of the sugar tax.

The department said this was to ensure that such drinks deliver “the core nutritional benefits of milk”. The Government had given a commitment to the European Commission to do this as part of the state aid approval process for the tax.

The Bill also includes measures in the childcare sector. These include exempting payments under the Child Support Act 2018 and, retrospectively, to certain child payments under other schemes. It also allows for accelerated capital allowances for childcare and fitness facilities provided by an employer.

A loophole that effectively allowed people to claim the valuable dwelling house exemption – where someone can inherit a home tax-free – while still owning another property housed is also being closed. The move follows Revenue concern that people have been using the device to circumvent a key condition of the relief – that the recipient owns no other property.