FBD not breaking out the bubbly just yet

Insurer is back in the black after a mild winter, but CEO Fiona Muldoon is cautious 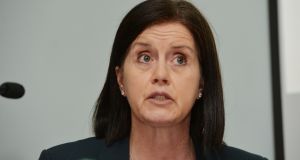 Fiona Muldoon, group chief executive of FBD: “We did get a little lucky.” Photograph: Alan Betson

Ever the pragmatist, FBD chief executive Fiona Muldoon wasn’t hanging out the flags yesterday in celebration at the insurer’s return to profit last year and the better-than-expected full-year results.

“We did get a little lucky,” she told The Irish Times, in a nod to the benign winter weather that was experienced at the tail end of last year. There was also a €7 million pension gain.

Judging by the 2.4 per cent drop in its share price, the markets weren’t getting too excited, either. It wasn’t helped by a UK government decision to cut the discount rate used to calculate lump sum payouts. The move is likely to force UK insurers to pay out more in cash to personal injury claimants to ensure that returns over their lifetime meet the awarded compensation.

Direct Line, which fell by 7.2 per cent in London, said it expected profit before tax to fall by £215 million to £230 million. Consultancy PwC said the rate change could add up to £75 to the average UK motor insurance policy.

There was a mixed reaction at home to the FBD results. Goodbody analyst Eamonn Hughes had pencilled in a net loss of €4.1 million for the year and said the results showed “really good momentum” that “may bring the year of normalised profitability forward one year” – from 2019 to 2018.

Investec suggested that 2016 could prove to be an important “inflection point” for FBD, which has been significantly restructured since Muldoon became CEO in 2015 and has just been rebranded.

Merrion analyst Darren McKinley raised his target price on FBD to €9 but lowered his recommendation to “hold”.

Muldoon remains cautious on the claims environment and the likelihood is that motor premiums will rise once again this year while investment returns will remain tight. She might also be wary that a big storm could blow its recovery off course.

1 Brexit: System agreed for Irish goods to skip checks on UK trade
2 High Court appoints interim examiner to Compu b parent company
3 How much do Irish people earn? And what will Covid-19 do to our wages?
4 Ireland faces 'deep downturn' this year and may not rebound until 2024 if there is a second wave
5 Why are markets booming when a crash is on the way?
6 David McCullagh announced as co-host of RTÉ Six One News
7 ‘The rental situation stops me moving back home’
8 Drumcondra credit union collapses as merger plan fails
9 Second Covid-19 outbreak and no-deal Brexit an appalling vista
10 Could your old car be giving away all your secrets to its new owner?
Real news has value SUBSCRIBE