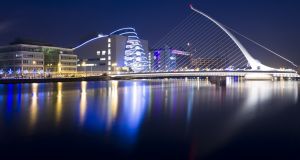 European home? A number of UK-based insurers are looking at a Dublin move. Photograph: iStock

Lloyd’s of London underwriter Hiscox said it has shortlisted two European Union countries and was in talks with regulators there to set up a new insurance base to continue servicing EU clients after Britain leaves the union.

Hiscox, which underwrites a range of risks from oil refineries to kidnappings, said it expected to begin the process of incorporating the legal entity in the first half of 2017, so that it could write new business using the new entity before the end of 2018.

Many London-listed insurers are drawing up plans to move some business to Europe if they lose their right to sell their products across the EU due to Brexit.

Industry sources involved say that many UK-regulated ship insurers are considering jurisdictions such as Luxembourg and Cyprus, while some other insurers have indicated that Dublin may be a favoured pick.

Insurer Beazley has said that it would hire additional staff in Ireland to establish a European insurance company in Dublin, while Lancashire Holdings has said it would wait for the Lloyd’s of London market to make a decision.

Hiscox had previously said that it was shortlisting from at least 10 countries for a potential base. It had indicated Luxembourg and Malta as potential sites, due to their strong regulatory structures, along with other countries where it has offices.

The company said on Monday that an EU base would help it grow and expand its European business, which employs 300 people, underwrites £174.7 million (€205 million) in premiums and has a combined ratio of 86.3 per cent.

Hiscox reported a 24 per cent rise in group gross premiums written to £2.402 billion for the year ended December 31st, while net premiums rose 17 per cent to £1.675 billion.