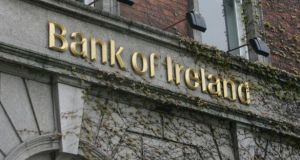 According to figures published in its results for 2016, the bank, which sells life and pension products from its New Ireland Assurance arm via its branches, said in 2016 that some 70 per cent (down from 75 per cent in 2015) of its customers in the Republic who took out a mortgage with the bank also took out a life-assurance policy with the group.

While the bank has just a 21 per cent share of the Irish life-assurance market – down from 24 per cent in 2014 – it manages to entice nearly three out of four mortgage customers to take out a life policy to cover their mortgage with the bank.

And not only that, but one in two mortgage customers of the bank also take out a general insurance policy, such as home insurance, with the bank.

The bank currently does not sell mortgages via the broker channel, but this could be working in its favour when it comes to pitching additional products to mortgage customers . The bank uses a price-comparison tool when offering life products, so customers are not necessarily losing out by sticking with the bank for extra services such as life or home cover.

Of course, Irish consumers tend to be poor at switching – just 0.06 per cent switched their current account in the first half of 2016, Central Bank figures show – which means the bank may have an opportunity to keep customers for the longer term at higher rates.

The report also shows that the bank paid an average interest rate of just 0.15 per cent on deposits in the second half of the year, while it has continued to up its share of mortgages on fixed rates. Back in 2014, just 30 per cent of new mortgage applicants with the bank opted for fixed-rate loans, but this has since soared to 75 per cent, as the bank has pursued a strategy of offering the lowest interest rates on fixed terms.

In November, Bank of Ireland chief executive Richie Boucher told an Oireachtas committee that the bank was deliberately keeping variable rates high to encourage customers to switch to fixed-rate mortgages, in order to provide certainty for both the bank and the customer.