The Standard Club chooses Dublin for strong talent pool and proximity to UK, EU and US 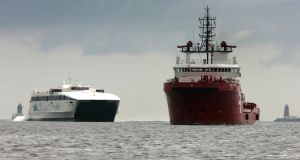 UK-based ship insurer Standard Club estimates that about 40 per cent of its business will be written through its new Dublin unit, which has been set up to allow the business to continue to service customers in the European Economic Area (EEA) in the wake of Brexit, according to its chief executive.

The Standard Club’s chief executive, Jeremy Grose, has told The Irish Times that the insurer currently generates about $290 million (€257.3 million) of premiums annually.

“Dublin was a natural choice for the Standard Club, particularly [given] the shared professional values, shared language and convenience from the UK, mainland Europe and east-coast USA,” Mr Grose said. “On top of that, there is an established insurance market in Dublin with a strong pool of talent to recruit from.”

The Standard Club first revealed in late 2017 that it intended to set up an EU hub in Dublin. It was authorised by the Central Bank of Ireland on January 23rd, according to regulatory filings. Rival North P&I also received regulatory approval last month to set up an Irish subsidiary last year to maintain access to the EEA market after the UK’s scheduled exit from the EU.

Mr Grose said that the Standard Club currently has six staff in Dublin, with plans to increase this to eight by the end of the year.

Last week, Standard & Poor’s (S&P) assigned an A rating and “stable” outlook to the Irish unit, The Standard Life Ireland DAC, which stands at five levels below its top-notch AAA grade.

“It is likely to be well-integrated with its parent and to share the same risk management and underwriting standards,” said S&P. “We consider that the club is committed to providing capital and financial support to its subsidiary.”

Standard Club and North P&A are among a number of insurers – including XL Insurance, Beazley, Hiscox, Bupa and Travelers – to have either set up Irish units or signalled plans to do so to prepare for a potential no-deal Brexit.

Central Bank deputy governor Ed Sibley said at an insurance conference on Friday that the regulator has been “delivering a proportionate, robust, efficient and effective authorisation process in line with European regulatory norms, for all firms seeking authorisation in Ireland as a result of Brexit”.