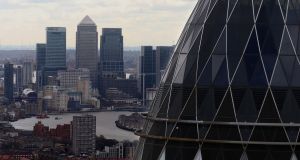 London skyline: Investment banks including Barclays, Bank of America Merrill Lynch and Citigroup revealed during the summer that they plan to expand their Irish operations as they prepare for the UK to quit the EU in March 2019. Photograph: Chris Radburn/PA

Banking lobby group UK Finance has called for the establishment of an “ambitious” free-trade agreement to preserve cross-border financial services between the country and the EU post-Brexit.

The report, published on Thursday, comes a day after the European Central Bank, which took over the supervision of euro zone banks three years ago, criticised the plans of many UK-based banks seeking to set up EU units to maintain access to the single market after Brexit takes effect in March 2019.

Major international financial groups are currently planning for a hard Brexit, where UK-based firms will lose their ability to passport financial services across the EU.

“Some elements in a number of banks’ plans do not fully meet the ECB’s expectations and requirement of banks operating in the euro area,” the ECB said, adding that banks need to be well-capitalised, and have enough funding and substance in the EU. “In other words, there cannot be empty shells or letter box banks.”

While the EU is reportedly looking at a post-Brexit free-trade deal with the UK along the lines of one it agreed with Canada last year after years of negotiations, UK Finance said in its 88-page report that this falls short in terms of properly promoting cross-border trading in financial services.

“Recognising that an ambitious approach is required and desirable, the model proposed in our report draws on WTO [World Trade Organisation] principles, together with approaches used in national licensing regimes in leading developed markets or by the EU to enable a high level of market access between the UK and the EU if this is politically agreed,” the UK Finance document said.

For this model to work, the EU and UK need to jointly agree that “closely aligned and high regional standards are common and mutually beneficial”, and that there is “value for the citizens, customers and economies of both sides in maintaining a strong and healthy regional capital and banking services market in Europe”.

Financial groups and regulators, however, cannot wait for the final outcome of Brexit and are proceeding on the basis that no such agreement will be reached. Investment banks including Barclays, Bank of America Merrill Lynch and Citigroup revealed during the summer that they plan to expand their Irish operations as they prepare for the UK to quit the EU in March 2019.