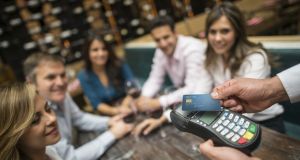 Debit card spending on restaurants rose 22 per cent year on year to €168 million in September.

The popularity of contactless payments has fuelled a 14 per cent rise in the value of debit card transactions.

Debit card PoS transactions now account for 54 per cent of new transactions on all cards. Contactless cards were introduced several years ago and their increasing popularity suggests consumers have overcome their initial wariness of the new technology.

The latest figures show debit card PoS spending was nearly three times the value of credit card spending in September, which was €889 million, and that spending across all categories is on the rise.

Debit card spending on restaurants was the standout, however, rising 22 per cent to €168 million in September.

People are also using debit cards more frequently abroad. The figures show that total debit card expenditure outside Ireland amounted to €1.3 billion in the three months to the end of September, some 15 per cent higher than the corresponding period last year.

In contrast to the increased use of debit cards, credit cards witnessed reductions in total spending, although there was limited growth in certain spending categories.

Debit card ecommerce transactions, where the physical card is not present as when shopping online, amounted to €1.36 million, with €948 million and €413 million attributable to debit cards and credit cards, respectively. This marked an increase of €93 million in the total figure over the quarter.

Brown Thomas and Arnotts join others in suspending online operations