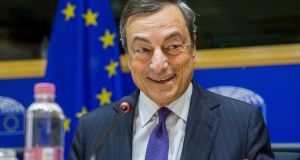 ECB president Mario Draghi. ECB purchases of Irish bonds plunged 45 per cent in January as the headroom began to narrow as a result of previous purchases. Photograph: Stephanie Lecocq/EPA

European Central Bank president Mario Draghi has pushed back on calls to ease Ireland’s current restricted access to his €2.5 trillion quantitative easing (QE) stimulus programme, signalling it is in Ireland’s gift to boost its eligibility.

Earlier this year, Ireland and Portugal were among the first euro-zone countries impacted by rules on the ECB’s QE programme, which prevents the organisation from buying more than 33 per cent of a member state’s eligible bonds or a third of any individual bond in issue.

In a letter to MEP Brian Hayes, dated November 8th, Mr Draghi said the ECB’s buying power for Irish debt could increase if the Central Bank, part of the euro system, continued to sell Government bonds it received in 2013 under a complex restructuring of the bailout of Anglo Irish Bank, which was renamed Irish Bank Resolution Corporation.

The Central Bank has sold €9 billion of the €25 billion of such bonds to the National Treasury Management Agency since 2014 and the agency has duly cancelled them.

“The ECB has stated in consecutive annual reports that these bond holdings give rise to persistent serious monetary financing concerns, and that a more ambitious sales schedule would mitigate these concerns,” said Mr Draghi. “Further disposals would also create more room for [ECB] purchases of marketable debt securities issued by the Irish Government and debt agencies.”

Ryan McGrath, head of fixed-income strategy at Cantor Fitzgerald, estimates that while the ECB plans to cut monthly bond purchases by 50 per cent to €30 billion across the euro zone from the start month as it winds down QE, it will be able to buy more than €400 million of Irish bonds a month. That’s down just 25 per cent from the average monthly amount for most of this year.

However, Mr Hayes said: “While the QE programme is going to be tapered from January next year, we cannot rule out the possibility that it will need to be revived if there is a major threat to the euro-zone economy. That would be when the 33 per cent limit will seriously bite. The ECB should look for a solution to this problem sooner rather than later.”