Those calling for cherry-picking part of single market should desist, Michel Barnier says

At a conference in Brussels, Michel Barnier has made clear that Ireland’s demand for UK assurances on the Border are completely at one with the EU Brexit negotiating stance. 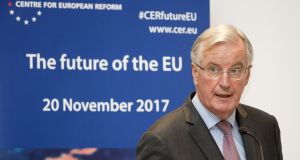 The European Union’s Brexit negotiator Michel Barnier has ruled out the prospect of UK financial firms benefiting from a special post-Brexit deal that will give them continued access to Europe’s single market.

“Those who claim that the UK should cherry-pick part of the single market must stop this contradiction,” Mr Barnier said at the Centre for European reform conference in Brussels on Monday.

“The single market is a package of four indivisible freedoms, common rules, institutions and enforcement structure. The UK knows these rules very well, like the back of its hand. It has contributed to defining them.”

Banking lobby group UK Finance last week called for the establishment of an “ambitious” free-trade agreement to preserve cross-border financial services between the country and the EU post-Brexit.

While the EU is reportedly looking at a post-Brexit free-trade deal with the UK along the lines of one it agreed with Canada last year after years of negotiations, UK Finance said this falls short in terms of properly promoting cross-border trading in financial services.

While international financial groups and regulators across Europe are planning for a hard Brexit, where UK-based firms lose EU passporting rights, the European Central Bank, which took over supervision of euro-zone banks three years ago, last week criticised the plans by many London-based firms seeking to set up EU units to main access to the single market.

“Some elements in a number of banks’ plans do not fully meet the ECB’s expectations and requirement of banks operating in the euro area,” the ECB said last Thursday, adding that banks need to be well-capitalised, and have enough funding and substance in the EU. “In other words, there cannot be empty shells or letter-box banks.”

1 Penneys will not reopen on Monday despite expected changes to lockdown rules
2 Tesla’s Elon Musk calls for breakup of Amazon in tweet
3 Passengers face queuing in car parks at Dublin Airport
4 Trinity Biotech expects Covid-19 immunity test to be authorised shortly
5 Land dispute between Citywest Hotel owner and neighbours before court
6 Brother is dragging his heels as executor of uncle’s will - is there anything I can do?
7 Backers agree new $60m investment in Limerick lessor Nordic Aviation Capital
8 Legionaries of Christ sell south Dublin lands for €23m
9 Angela Merkel sweeps in to save the euro zone
10 Aston Martin chief to leave as part of shake-up
Real news has value SUBSCRIBE