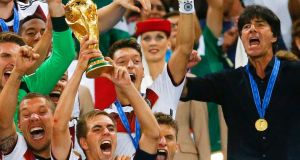 With the start of the World Cup in Russia less than a month away, UBS Global Wealth Management deployed a team of 18 analysts and editors, and ran a computer simulation of the tournament 10,000 times, in an effort to predict the likely winner of the tournament.

The bank explained its methodology in a comprehensive 17-page research note. As well as colourful facts about the tournament host - the note includes plenty of advice for investors seeking growth potential in Russia.

However, the headline is that tournament model, which UBS dubs the World Football Elo Rating. It turns up a few surprises, for sure: long-term underachievers England are ranked fourth, with an 8.5 per cent chance of winning the World Cup and a 68.5 per cent chance of making it through to the quarter-finals. That’s the highest probability of any team in the tournament.

Highly ranked European teams France and Belgium rank below England in the prediction league, coming in fifth and sixth.

Which leaves the top three. So, what did those 10,000 simulations and 18 analysts conclude about the likely winners of the World Cup?

It’s Germany, by some distance, with Brazil and Spain coming in behind. - Bloomberg