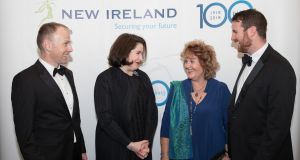 Bank of Ireland’s life and pensions business, New Ireland Assurance, celebrated its 100th anniversary at an event in Dublin on Thursday night.

Originally based on O’Connell Street in Dublin, the life assurance business was founded on January 5th 1918 and now has more than 800 employees across the country.

“Over this past 100 years we have seen revolution and evolution, war and peace, economic climbs and declines – but in all of this, the resilience of those associated with New Ireland has kept the company growing,” Bank of Ireland chief executive Francesca McDonagh said.

New Ireland managing director Michael Murphy said reaching such a significant milestone was a testament to the loyal colleagues of the business, both past and present.

“I am particularly delighted to see customers, business partners, industry peers, former and current colleagues from New Ireland and across the Group for such an exceptional event in our history.

“Tonight is not just about celebrating our past but also looking ahead with excitement to the future,” he said.

Michael D’Arcy, Minister of State for Financial Services and Insurance, congratulated all involved in reaching the 100-year milestone, something that “shows the ability to evolve and innovate”, he said.