Barclays to sell on Lloyds’ Irish mortgages after €4.6bn deal 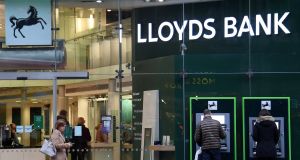 Lloyds handed back its Irish licences in 2010 and started to sell down the portfolio at pace.

Barclays has snapped up Lloyds Banking Group’s remaining Irish mortgage portfolio for £4 billion (€4.6 billion) and plans to refinance the loans in the bond market.

Sources said that the bank has lined up UK asset manager M&G Investments and US investment giant Pimco to acquire residential mortgage-backed securities (RMBS) linked to the mortgages. Barclays will also hold onto at least 5 per cent of the notes, in line with securitisation rules brought in following the global financial crisis. Further bonds will also be sold in the wider market in the next two months, they said.

The Irish Times first reported last November that Lloyds was planning to dispose of its remaining Irish home loans, which are mainly performing, and had hired Deloitte to manage the process.

The sale means Lloyds has all-but exited the Irish market, having inherited a €32 billion loan book in the Republic under its takeover of Scottish group HBOS in a 2008 rescue deal engineered by the UK government. Lloyds handed back its Irish licence in 2010 and subsequently started to sell down the portfolio at pace.

“Following the transaction the group will have minimal exposure to Ireland and the total outstanding run-off portfolio will be around £4 billion, less than 1 per cent of the group’s loans and advances to customers,” Lloyds said on Friday.

Most of the remaining loans comprise commercial real-estate and corporate advances that are impaired and against which the bank holds large loan-loss provisions.

The mortgage portfolio sale covers gross assets of around £4.3 billion, of which £300 million are impaired, according to Lloyds. The portfolio generated a pre-tax loss of £40 million pounds last year. Lloyds said that it will have to absorb a £110 million loss on the loan sale, which will be booked in the first half of the year.

Sources had previous said that a large portion of the portfolio is made up of long-term interest-only mortgages, which were issued to professionals during the property boom. This made the loans less attractive to the typical overseas buyers of non-performing Irish loans in recent years.

Barclays’ plans for Lloyds Irish loans comes hot on the heels of the bank and Pimco agreeing last month to buy and securitise £5.3 billion of mortgages previously held by UK Asset Resolution, a bad bank set up in 2010 to take on the loans of failed lenders Northern Rock and Bradford & Bingley.

Securitisation deals involve loans such as mortgages being moved to a special purpose vehicle, which then sells bonds secured against the assets to pension funds and other investors.

Separately, sources said earlier this week that Permanent TSB is planning to sell up to €900 million of split mortgages in bond markets in order to remove the assets from its balance sheet while still maintaining its existing day-to-day relationship with borrowers.

Such a transaction has emerged as the bank’s preferred option to deal with the mortgages, which are currently classified as non-performing loans, after PTSB said on Wednesday that it had decided to pull them from a large portfolio sale.

Guidance from the European Central Bank (ECB) in the past month had otherwise made it difficult for PTSB to pursue its original main blueprint of reclassifying split mortgages, where repayments on part of a loan are put on ice until a future date, as performing loans.