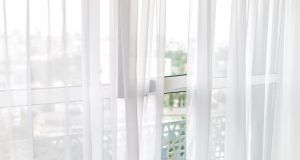 Last December, Cornel Living Ltd lodged fast-track plans with An Bord Pleanála for the eight apartment blocks including one reaching 12 storeys in height at Cornelscourt village in Dublin 18. Photograph: iStock

Plans to construct 452 build-to-rent apartments in eight apartment blocks in Cornelscourt village in south Dublin are facing opposition from both locals and council planners.

The proposed development – which lies adjacent to the N11 – also includes 10 semi-detached homes and six bungalows along with a cafe/restaurant.

In addition, an evaluation of the plan by planners at Dún Laoghaire-Rathdown County Council has recommended to the appeals board that planning be refused on a number of grounds.

Already this year in a number of large scale strategic housing development cases, the appeals board has granted the green light to developments that were opposed by local authorities and residents by citing official Government policy on the need to ramp up housing development.

In response to the Cornel Living plan, Dún Laoghaire-Rathdown County Council states that planning should be refused due to the height of a number of the tower blocks as only blocks of six storeys are permitted in the county development plan.

“ Rentals on this scale attract transient populations and add nothing to the local community,” she said, adding that she fully supports appropriate development.

1 My aunt never told us that Gran passed away with no will
2 Ryanair and Aer Lingus cut flights as travel restrictions continue
3 Ireland’s age of retirement must be pushed out, watchdog warns
4 Watchdog warns of major fiscal challenges with growth to slow to 1%
5 Private investors acquire prime Dublin 2 assets as lockdown lifts
6 Brussels plans attack on low-tax member states
7 If it’s safe to do so, could this be the time to spend for Ireland?
8 Political row brewing if Ireland loses its appeal on Apple
9 The $6bn judgment pitting Nigeria against Irish businessmen
10 Social housing expected to attract considerable private investment
Real news has value SUBSCRIBE