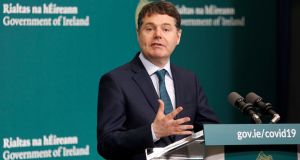 Minister for Finance Paschal Donohoe said last Friday he would be following up with Insurance Ireland this week on ‘urgent matters such as business interruption cover’. Photograph: Photocall Ireland/PA Wire

The Minister for Finance Paschal Donohoe will hold a virtual meeting with executives from Insurance Ireland on Friday afternoon amid concerns that the industry is relying on fine print and technicalities to avoid business interruption payouts while much of the economy is in Covid-19 lockdown.

Most commercial policies that cover losses in the event of business interruption do not offer coverage for infectious disease. However, insurers are generally rejecting claims on policies that mention notifiable diseases on the basis that they were meant to cover isolated outbreaks and not a pandemic.

The Central Bank has ordered insurers that it regulates to submit detailed breakdowns of their business interruption policies by the end of April, including data on contracts with ambiguous language and how these are being addrressed.

The bank said in a letter to insurance chief executives late last month that while most policy wordings are clear in terms of coverage provide and what exclusions are in place, “where there is a doubt about the meaning of a term, the interpretation most favourable to their customer should prevail”.

The clear risk for insurers is that they may find themselves caught up on a Central Bank examination similar to the tracker-mortgage debacle, which has cost the banking industry €1.5 billion, according to industry and regulatory sources.

Mr Donohoe said last Friday as the insurance industry announced a series of measures – including plans to reduce premiums for business customers to reflect lower motor, public and employer liability exposure as a result of Covid-19 restrictions – that he would be following up with Insurance Ireland this week on “urgent matters such as business interruption cover”.

“The Minister sees insurers as a fundamental part of the economy and believes that they have a major role to play in ensuring that the economy can continue functioning in these very difficult times,” a Department of Finance spokesman said on Thursday, confirming plans for the virtual meeting on Friday afternoon.