Profits tumble at Citigroup and Bank of America 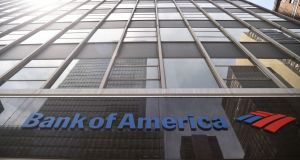 Even with all the challenges, analysts expect Bank of America to weather the downturn better than its peers. File photograph: Getty

Citigroup reported a 46 per cent plunge in quarterly profit on Wednesday as the bank set aside nearly $5 billion (€4.59 billion) to prepare for an expected flood of defaults on loans due to a virtual halt in economic activity caused by the coronavirus pandemic.

The outbreak has shuttered businesses around the globe temporarily, put millions out of work in the United States alone and is expected to cause the deepest recession in recent memory.

Wall Street banks are bracing themselves for a sharp rise in loan defaults as rising unemployment rates leave Americans cash strapped and unable to make payments on credit cards, mortgages and other loans.

Lenders with more exposure to unsecured loans, such as credit cards, are more susceptible to hefty write-downs, as credit card delinquencies have historically risen in step with unemployment.

Citigroup recorded a $4.89 billion expense in the quarter, up from $20 million in the year-ago period, to boost reserves against anticipated losses on loans, primarily in its credit cards.

Bank of America also reported a steep drop in first-quarter profit as it prepared for billions in potential loan losses. However, it is still growing its loan book in the hope that it can position itself as part of the solution to this financial crisis, rather than the culprit as in 2008.

Even with all the challenges, analysts expect Bank of America, known as a more conservative bank, to weather the downturn better than its peers due to smaller exposure to credit cards and tighter credit standards.

The second-largest US bank by assets used its fortified balance sheet to extend an additional $57 billion in loans, or a 6 per cent increase during the quarter, as cash-strapped companies tapped credit lines and sought new loans to help tide them through the crisis.

JPMorgan Chase said on Tuesday its profit plunged by more than two-thirds mostly because of a $7 billion addition to loan-loss reserves, half of which were for credit cards.

The blow to earnings for Citi was cushioned by a surge in fees as trading desks cashed in on the turbulent markets in February and March. Both equities and fixed-income trading reported a 39 per cent jump from a year earlier.