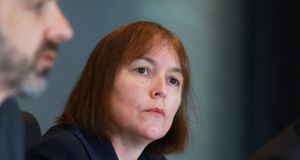 Sharon Donnery: she argued in favour of banks setting aside a so-called countercyclical capital buffer “early in the cycle so as to ensure sufficient resilience is built up”

The Central Bank has put the State’s lenders on notice that they face having to set aside additional capital to protect themselves from shock losses in the event of another downturn.

Sharon Donnery, a deputy governor at the Central Bank, used a speech at Maynooth University to argue in favour of banks setting aside a so-called countercyclical capital buffer (CCyB) “early in the cycle so as to ensure sufficient resilience is built up”.

Central banks and regulators across the EU have been obliged since the start of 2016 to make lenders ringfence funds as a CCyB when they judge that credit growth is becoming excessive. The buffers are in addition to normal capital reserve demands, and are part of a raft of new rules designed to avoid a future crisis.

For example, Sweden has told its banks to set aside a capital buffer of 2 per cent of risk-weighted assets since March, and the UK is targeting a rate of 1 per cent by the end of this year.

While most other countries in the EU, including the Republic, have not yet set a CCyB rate for their banks, Ms Donnery said moving early to force banks to build up a buffer could minimise any potential tightening of credit conditions, which could hit the economy. The Organisation for Economic Co-operation and Development (OECD) noted in a report published this week that new mortgage loans and credit to small firms, mainly in the construction industry, have risen sharply in recent months.

Ms Donnery said that a capital buffer would be complementary to the Central Bank’s mortgage lending rules, introduced in 2015.

“Given that residential mortgages account for the majority of Irish banks’ total outstanding lending, it is appropriate that the effect of the borrower-based measures on risk-taking in the domestic mortgage market is closely monitored,” said Ms Donnery. “However, approximately 30 per cent of these banks’ outstanding Irish loans are to customers in the SME, corporate, commercial real estate and non-mortgage consumer asset classes.”

The deputy governor noted that a rebound in employment and household incomes have already been reflected in a strong asset price inflation, particularly house prices, in recent years.

Irish home prices have rallied by 75 per cent from their low point in 2013, though they still remain 21.6 per cent below their 2007 peak as of March, according to the Central Statistics Office.

“At this stage of the economic and financial cycle, however, we are now facing additional challenges – how to maintain sustainable and balanced growth when the economy hits capacity constraints,” Ms Donnery said.