SoftBank and Swiss Re end talks on minority stake 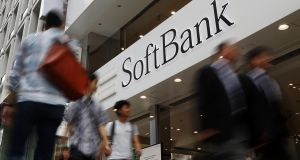 SoftBank and Swiss Re said they had “agreed to end discussions” about a potential minority investment of the Japanese conglomerate in the Zurich-based reinsurer. Photograph: Tomohiro Ohsumi/Bloomberg

SoftBank and Swiss Re have confirmed the collapse of talks over the Japanese company taking a minority stake in the reinsurance group.

The two groups announced on Monday that they had “agreed to end discussions” about a potential minority investment of SoftBank in Swiss Re. However, the two sides said they could still explore business partnerships.

Although no official explanation was given for the talks’ failure, people close to the negotiations had previously noted the Japanese company’s waning interest in the deal.

When the discussions were first revealed in February, SoftBank was considering a stake of up to 33 per cent, alongside several seats on the board of the Zurich-based insurance company. But Swiss Re later said the holding would probably not exceed 10 per cent.

A deal with Swiss Re would have significantly extended SoftBank’s interests in financial services. Swiss Re chairman Walter Keilholz was said to be “intrigued” by insights the Japanese company could offer into technological developments.

With downward pressure on global insurance policy prices squeezing its profits, however, Swiss Re did not need extra capital. Moreover, Swiss Re made clear that it would not dilute other shareholders’ interests by issuing new shares – and SoftBank would have instead had to buy its stake on the open market.

The end of the discussions was “not really surprising but still somehow disappointing”, wrote Stefan Schürmann, who follows Swiss Re at Vontobel in Zurich, in a note. “Such a deal would have allowed a friendly long-term minority shareholder, improved access to high-growth Asian markets and the leveraging of technological platforms from both parties.”

Swiss Re said on Monday it would “continue to implement its technology strategy with a combination of in-house developments and third-party collaborations”. Against that background, it would “also further explore business ideas between Swiss Re’s operative entities and the portfolio companies of SoftBank”.

Swiss Re reported net income of $457 million (€393 million) in the first quarter of 2018, down from $656 million in the same period a year earlier as a result of accounting rule changes. Gross premiums written of $11.5 billion in the first three months of the year were up 13 per cent compared with a year earlier. – Copyright The Financial Times Limited 2018