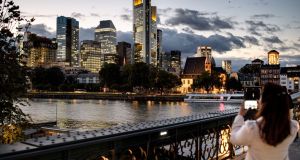 The corporate headquarters of Commerzbank in Frankfurt: jitters about the health of German lenders Deutsche Bank and Commerzbank are a painful recent memory. Photograph: Thomas Lohnes/Getty Images

The announcement by the European Commission of a new set of banking regulations, including tougher loss-absorbing and leveraging rules, marks the latest attempt to regulate the sector in the wake of the financial crisis.

As with many proposals from Brussels, a number of the elements contained within the complex package had already been agreed at international level, and will simply be enshrined in EU law.

But there are some significant differences. These include a controversial requirement that non-EU banks operating in Europe must effectively hold more capital than their EU counterparts.

Under the proposal announced on Wednesday, foreign banks with total EU assets of at least €30 billion will be required to group their subsidiaries under a single parent company.

This follows similar requirements imposed by US regulators on European banks in 2014. While EU officials played down any suggestion that the move was a retaliatory action, stressing that the measure was introduced to ensure that the resolution of such banks could be managed effectively, the development points to continuing regulatory tensions between Brussels and Washington.

Tense discussion is likely, with the US expected to dig its heels in about the need for tighter controls.

With concerns about the state of the Italian banking sector still weighing heavily on EU policymakers, and jitters about the health of German lenders Deutsche Bank and Commerzbank a painful recent memory, Wednesday’s announcement aims to show that the EU is taking its regulatory responsibilities seriously when it comes to its 8,000 banks.

But with the package now commencing its lengthy journey though the EU legislative process, where it will need to get approval from member states and the parliament, it could be many years before the proposals see the light of day.