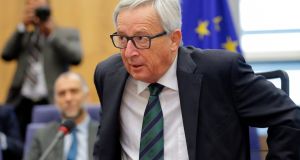 The European Commission has proposed new rules for European banks in an attempt to kickstart growth and lending in the European economy, and complete the much-feted European banking union.

Under a banking reform package unveiled on Wednesday, Brussels announced new loss-absorbing capacity rules which would require the region’s biggest banks to hold sufficient assets to draw on in case of financial distress. The measure, known as Total Loss Absorbing Capacity would examine the ratio and mix of equity and debt banks use to fund themselves, potentially pressuring some banks to increase their debt issuance.

In addition the commission is proposing a new binding leverage ratio of 3 per cent of assets, to curb the practice of excessive lending by under-capitalised banks.

Controversially, the package also includes new rules that will require large foreign banks operating within the European Union to hold extra capital, potentially opening-up a clash with the United States.

Today’s proposals are likely to be seen as a retaliatory measure by Europe against rules introduced by the US in 2014 which required overseas lenders to capitalise their US subsidiaries separately.

It could also have implications for British banks, post-Brexit, if the jurisdiction is no longer a member of the single market.

Announcing the package in Brussels, Latvian commissioner for the euro Valdis Dombrovskis said the new proposal would “build on the agreed global standards while taking into account the specificities of the European banking sector.”

Today’s proposals, if adopted, will lead to changes to key pieces of EU banking legislation, including the Banking Resolution and Recovery Directive and Capital Requirements Directive.

Europe’s banks have been suffering from low equity valuations and profitability in recent years, while residual problems remain in a number of banks, particularly in Italy, which is struggling with non-performing loans in its banking sector.

Wednesday’s proposals do not include proposed changes to risk and credit measures that are being discussed by the Basel committee, which European regulators have been resisting.

The concept of a “banking union” was launched in the wake of the financial crisis, but key parts of the proposal remain unfinished, in particular a common deposit guarantee scheme which is being opposed by a number of countries including Germany.

European Central Bank president Mario Draghi told the European Parliament earlier this week that there is a problem of overcapacity in some sectors of the banking industry in Europe, denying that the bank’s monetary policy was contributing to difficulties in the European banking sector.

Women accounted for 60% Iseq board recruits in 2019